Sleek high rises, modern malls with designer shops and food courts, elaborate temples, street shrines, and narrow alleyways with a life of their own.

From snowy Seoul to steamy Bangkok; what a change – not just in climate. We ditched the winter coats and pulled out the swimsuits. Happily, we have gotten over the jet lag and adjusted to the new time zone (we are not waking up at 4:00 AM anymore). Our seven nights in Bangkok included a sampling of the major sights, trying out the different transportation options (see the video of the tuk tuk ride in Travel Tips section), daily workouts at the hotel gym, and even some pool time.

The Grand Palace is a walled complex that includes several buildings, temples, and museums. It is one of the most popular tourist attractions in Bangkok. We had read about the dress code to enter the Temple of the Emerald Buddha, so we decided to check out the rest of the palace and just look at the temple from the outside. But the dress code actually applies to the entire Palace grounds and the guards stop everyone who is not in compliance. So we went to the long line to borrow appropriate clothes. You can borrow whatever you need (for men: pants and/or shoes; for women: skirt, shirt and/or shoes) and pay a 200 baht refundable deposit per item. Lori got a cute, but hot skirt. Michael got Grandpa pants (see photos below). 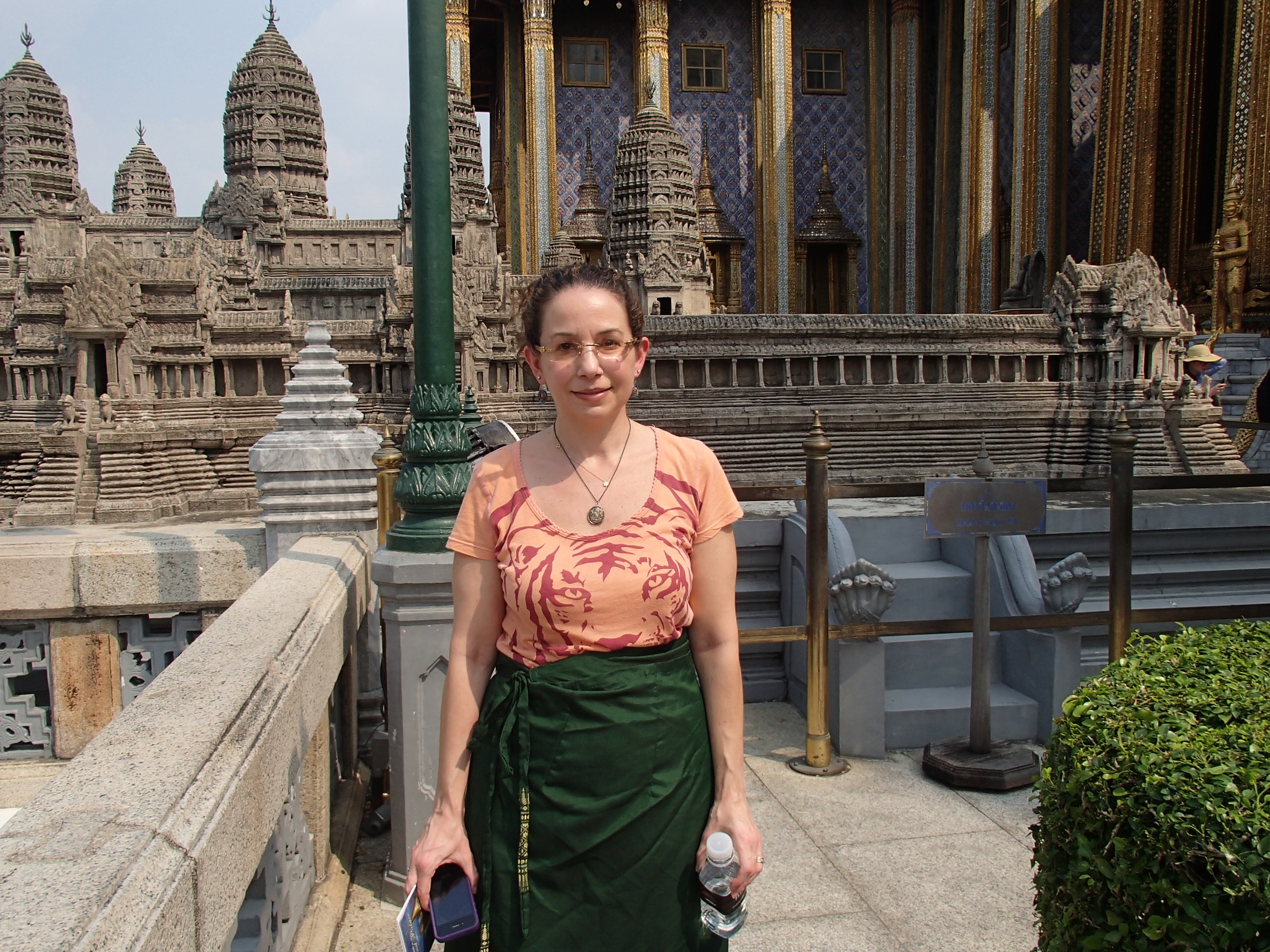 The Palace buildings are very beautiful and interesting, but so very crowded that it was not enjoyable to explore. We were constantly herded through narrow walkways to get to the different areas. People were walking in every direction and jumping in front of cool photo op spots. We should have known when we saw the traffic and lines of tour busses on the road approaching the Palace.

The Wat Phra Kaeo Museum had elaborately decorated items from the royal family: swords, jewelry, and household items; along with Thai coins and royal decorations. (Sorry, no photos – not allowed.)

After exiting the Grand Palace, the Chao Phaya River is a short walk away. Across the river is a Wat Arun, the Temple of Dawn, from the Chakri dynasty, built in the Khmer style with a 79-meter high tower. We walked down a narrow alleyway to a rickety dock to take the ferry across the river. There are also bridges to walk across, but they were not nearby. There is an admission charge and dress code to enter the temple, so we just checked it out from the outside. There was an event going on with praying, singing, shrines, and the biggest incense sticks we have ever seen. 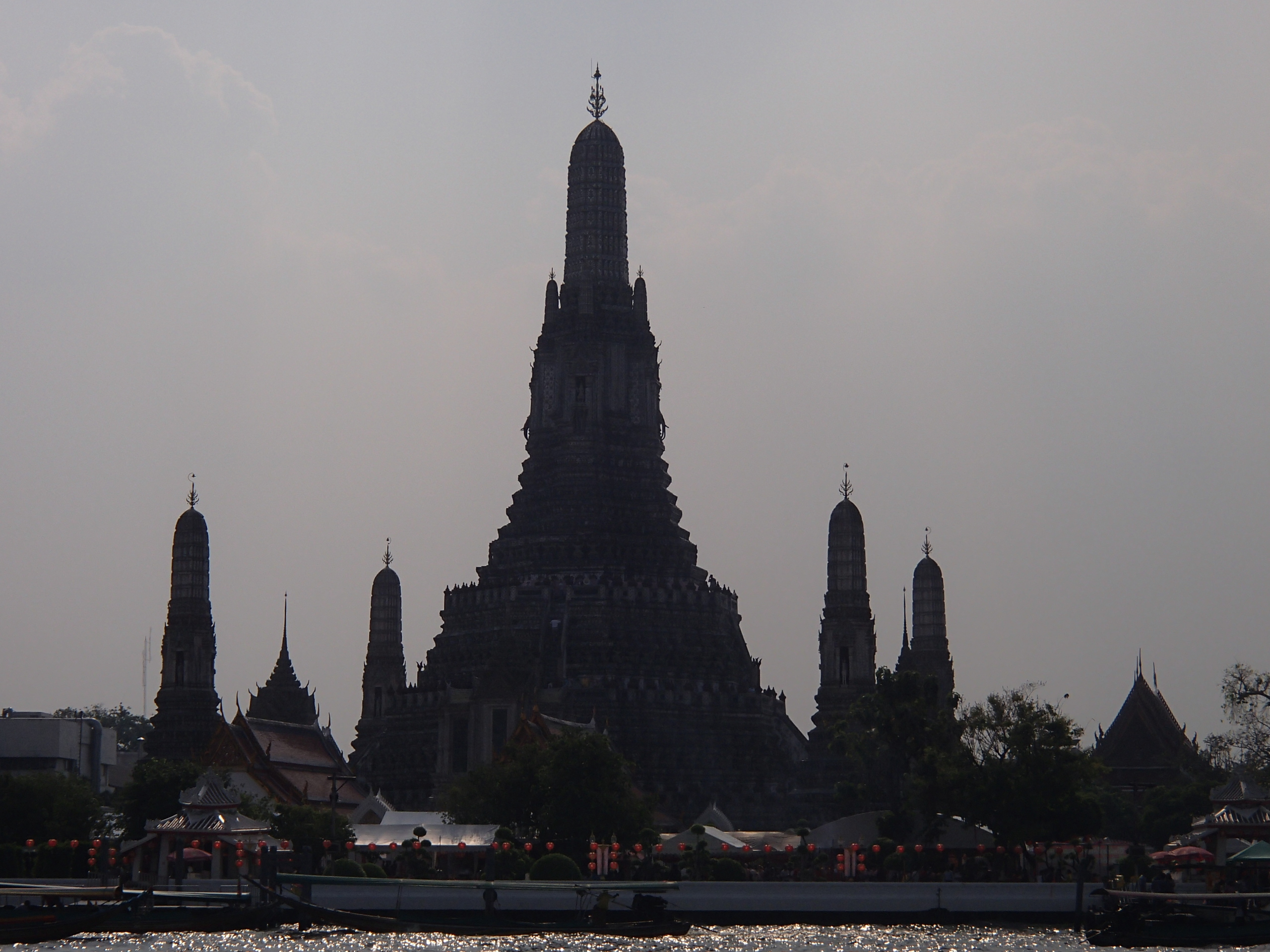 We read some reviews on Tripadvisor and other sites before we went to a Chatachak Market, and most of what was written was true. The market was easy to get to from the Skytrain (about 7 stations from Siam station). The train stops by the market and it is a 5-minute walk to the closest gate. There is no admission charge. The market is huge and hot! It spans 27 acres and has 15,000 booths that sell just about everything. We arrived 1 hour before closing time and saw just a small section of the market – mostly clothing, jewelry, beads, incense, souvenirs, food booths, and a little bar with happy guys (Hooter Girls?) dancing to loud music. At one point, music played over a PA system and everyone stopped and waited. Michael knew that it was the Thai national anthem (played daily at 8:00 AM and 6:00 PM). 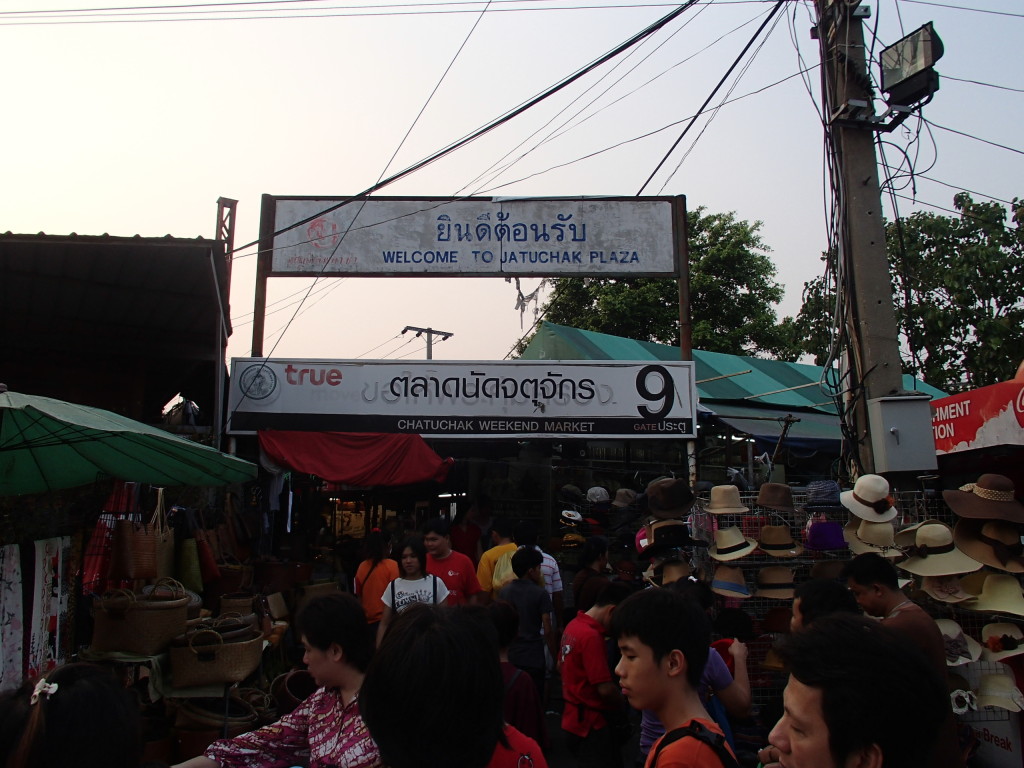 The Ratchaprasong area really is a shopper’s heaven. There are several indoor malls and tons of shops and restaurants. We checked out CentralWorld, Erawan, Gaysorn, and Siam Center / Siam Paragon. There is a large elevated walkway that connects the shops and metro station to make it easier to get around. Although we don’t plan to do much shopping on our trip, we do like to look. But when Lori arrived at Siam Center, the sleeping shopping gene started to awaken (we haven’t shopped for several years to save for this trip). The third floor at Siam Center features items from Thai designers – we saw some cool, unique stores like The Selected and Greyhound. Lori almost bought a few things… We stopped at the gourmet market twice to pick up goodies. This terribly tempting area was just two stops away from the hotel on the Skytrain. 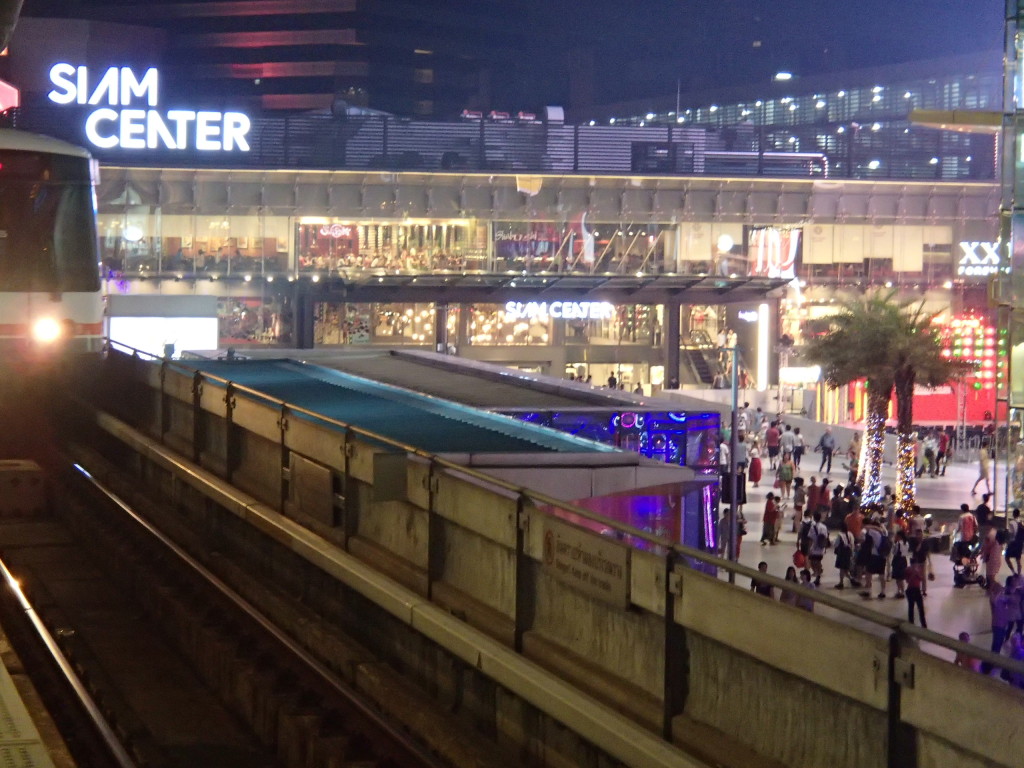 On our first night, we wandered unknowingly into one of the red light districts Patpong. We saw the typical clubs with racy shows and dancers, one with a bondage theme (the barker yelled out ‘you don’t know unless you try’ as he snapped a whip), and girls looking for a date. Maybe it was early, but it was fairly mellow and we didn’t feel unsafe. 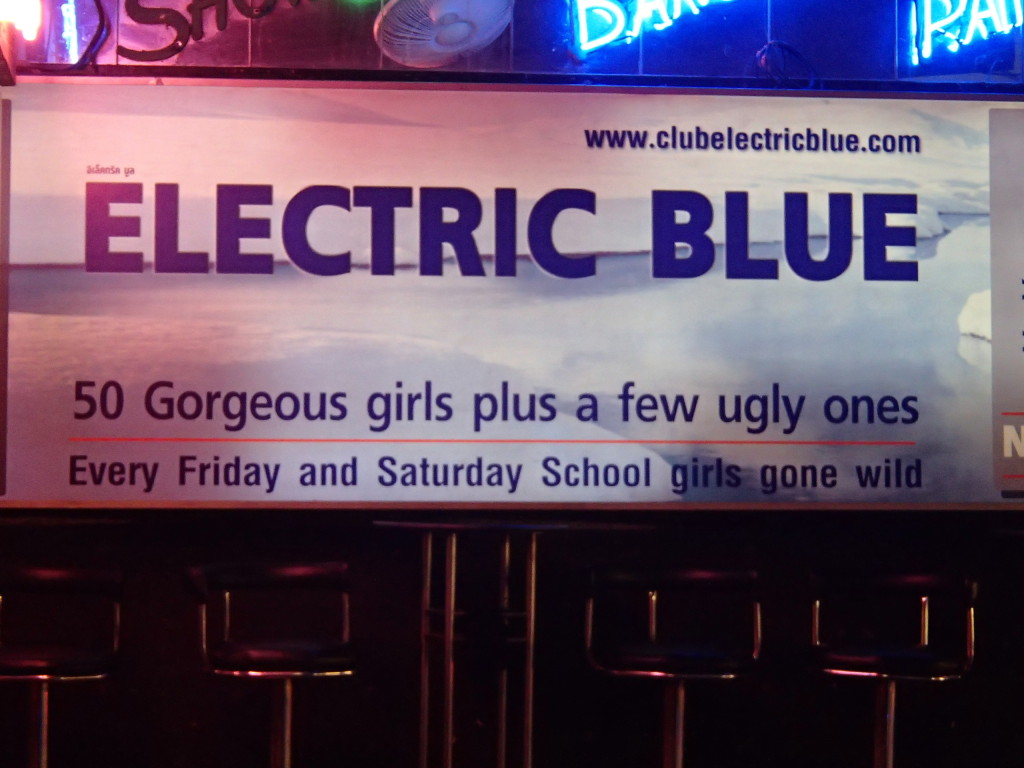 Wow – did we see a lot of street food! Many of the restaurants are indoor/outdoor with folding metal tables and plastic stools on the sidewalk. People ate communal style with shared side dishes and condiments. We saw everything from beautiful fresh fruit, stinky fishes with skin and heads, and things that we couldn’t identify. Some of the street food looked and smelled great but we were hesitant to try (we saw many vendors washing dishes in tubs sitting on the sidewalk). We were too chicken to risk getting sick (oh, did I mention that some of the roasted chickens still had their head and neck). 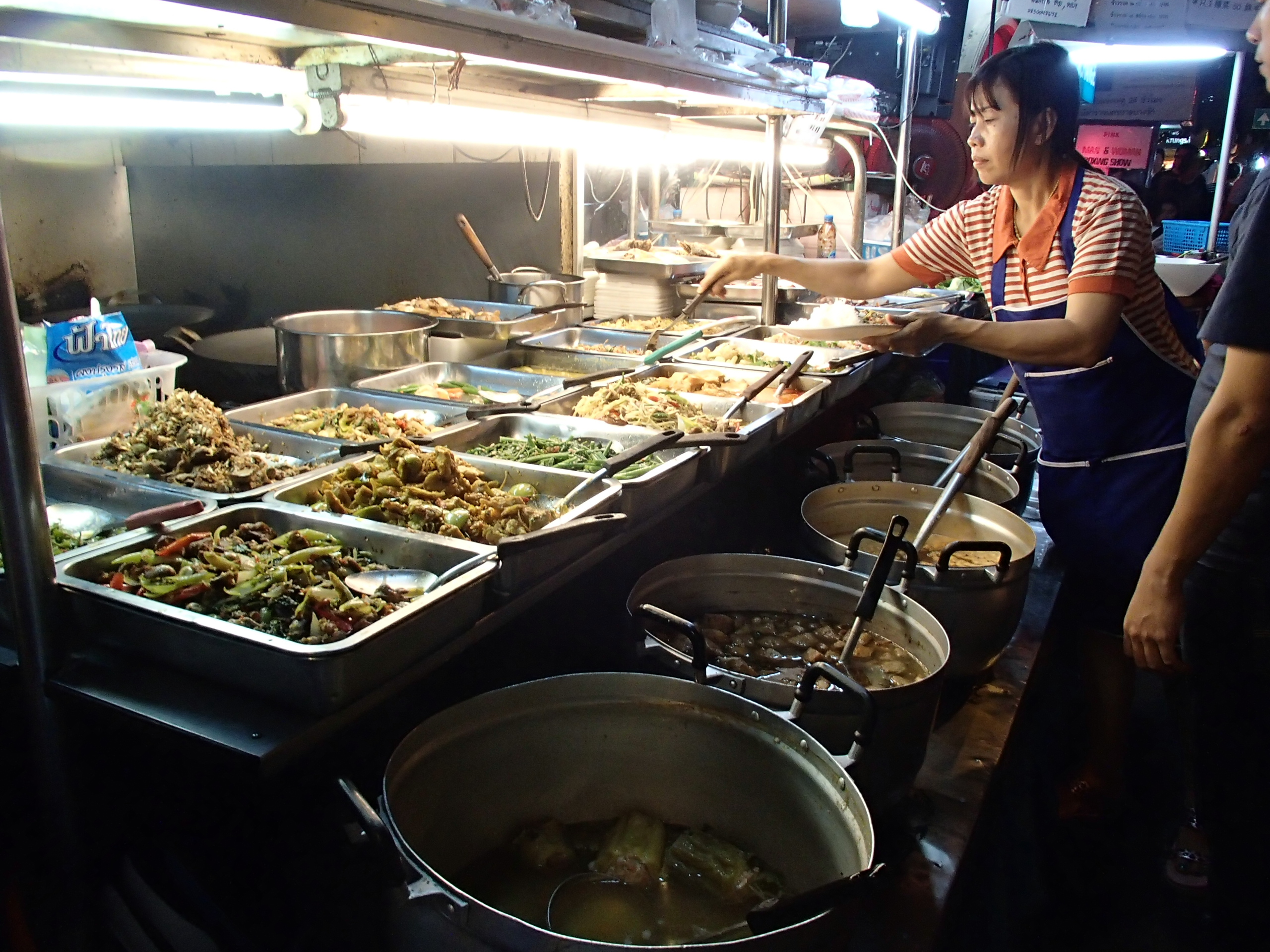 The city is more modern than Lori imagined (Michael had been here before), but also retains many traditions. The most impressionable sights were the narrow alleyways with small family shops, street food vendors, shrines and spirit houses. 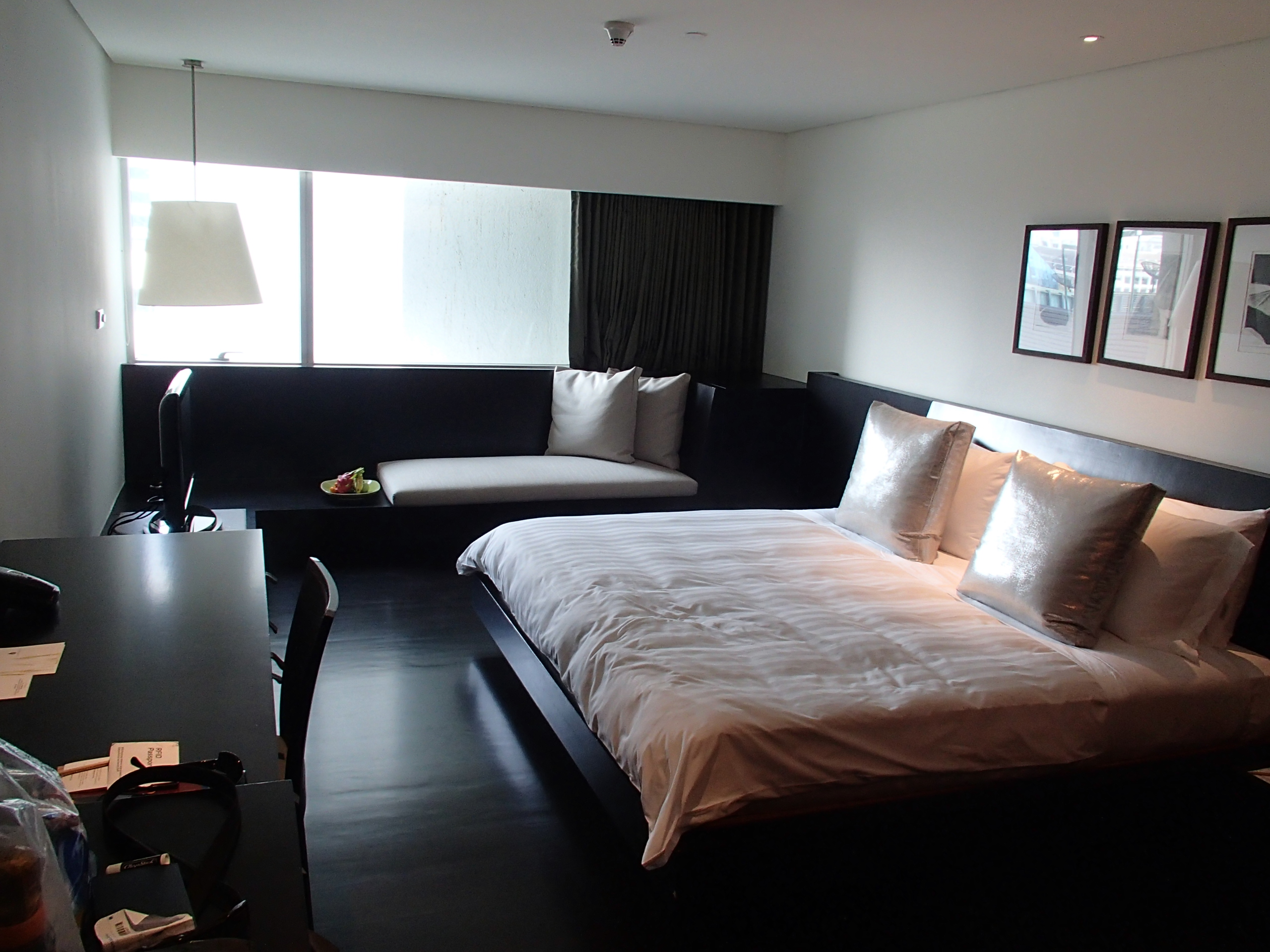 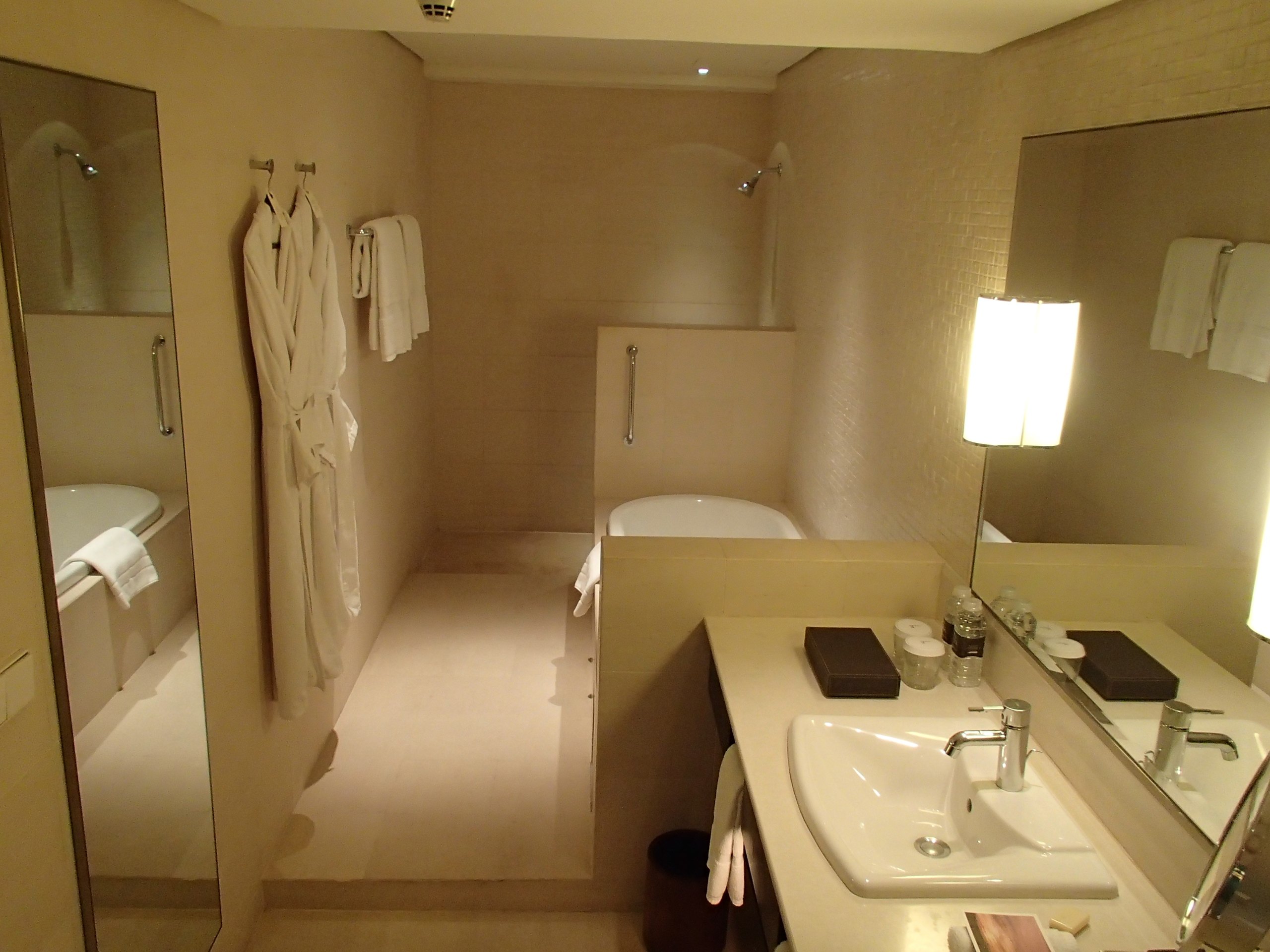 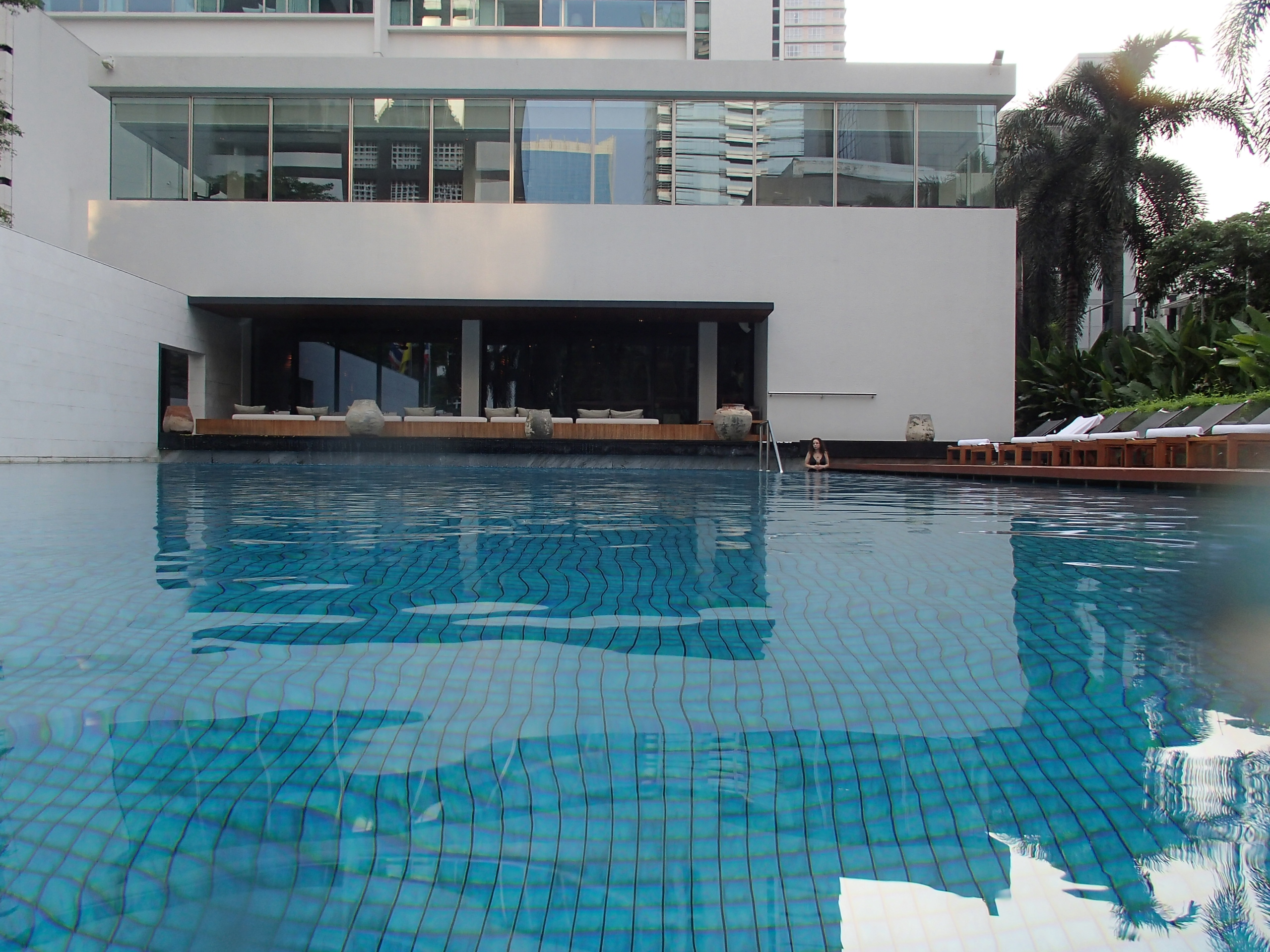 Staying Cool
Bangkok is hot – even in the winter (average February temperatures are 91F high / 74F low). Many attractions, restaurants, and shops are outside, so wear cool, breathable clothing and drink lots of water. When you find someplace air conditioned, pop inside to cool off.

The Skytrain is as easy to navigate and buy tickets as any other city. But beware – during peak times, the trains are extremely crowded – to the point that you are tightly sandwiched between everyone and it can be hard to get off.

For the Chao Phaya River express boats, check out this website for information about the different boats: Bangkok Sawadee. Here’s a video of our boat ride from Wat Arun to the metro station.

Before you get in a tuk tuk, have a rough idea of how much the fare should be and ask the driver his fee. We had a driver quote 100 baht more than the taxi charged to get us to the area and so we negotiated. Jump in, tie your hair back, and hang on. Here’s a video of our tuk tuk ride.

This is one of my favorite Bangkok websites – I used it all the time: Bangkok.com.