Three years after the world trip, we dusted off our passports and headed to one of the most remote places on earth – the volcanic island of Rapa Nui (also known as Easter Island) in the Pacific Ocean between Chile and Tahiti.

The first people who lived on Rapa Nui came from Polynesia sometime between 300 – 1200 AD, led by King Hoto-Matua. The population grew and developed a rich culture with ten main groups – called mata. The land was organized so that the coast was reserved for ceremonial structures and homes for the high ranking clans. The common groups lived in the interior of the island where they farmed and raised animals. The first European explorers to visit the island arrived on Easter in 1722, and thus decided to call the land Easter Island. In 1888, Chile annexed the island (see details about how Chile acquired Easter Island).

The islanders faced challenges which nearly wiped out the ecosystem and population in the late 19th century – internal conflict, loss of natural resources, slave raids, and disease brought by visitors. There is disagreement among scientists about the cause and timeline of the decline – see the mystery of Easter Island. In 1995, Rapa Nui National Park was designated as a Unesco World Heritage site. In the early 2010s, the island was unsuccessful at gaining independence from Chile. See more about the history of Rapa Nui.

The early Rapa Nui people worshipped their ancestors and created moai statues from volcanic stone to honor the dead from the higher clans. Some clans built platforms / altars (called ahu) on the coast for their moai. There are male and female moai, with an average height of 13 feet. The moai throughout the island are in varying conditions – some stand tall on their ahu, others lie face down on the earth, some are in pieces, and many wait unfinished in the Rano Raraku quarry. Over the years, various groups have completed restoration projects at some of the sites (our tour guide worked on a Japanese project at Ahu Tongariki in 1995).

With over 900 moai throughout the island, you don’t have to go far to see these incredible statues. Several are within walking distance of the town – Hanga Roa. To see the rest, you can rent a car or bike and explore on your own or join a guided tour. We walked to the moai close to town and then opted for tours so we could learn about the history from a guide. We booked tours with Mauru Travel at the hotel’s front desk.

Walk north on Avenida Policarpo Toro along the coast to see individual moai and platforms (ahu) near the museum. 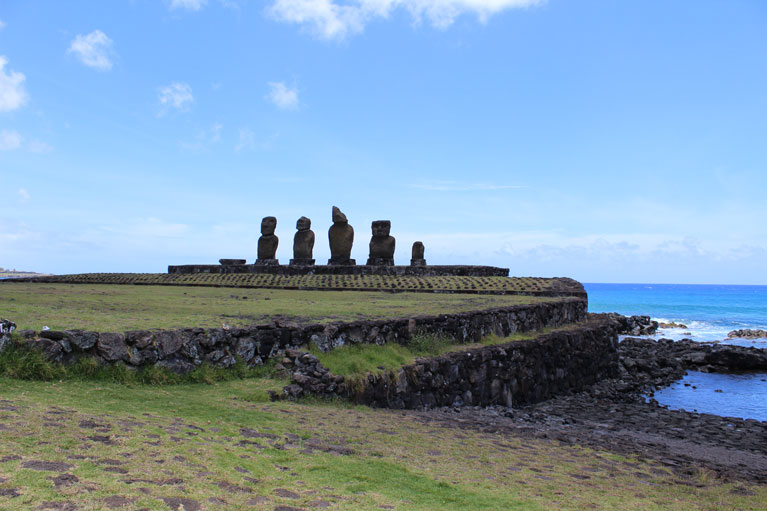 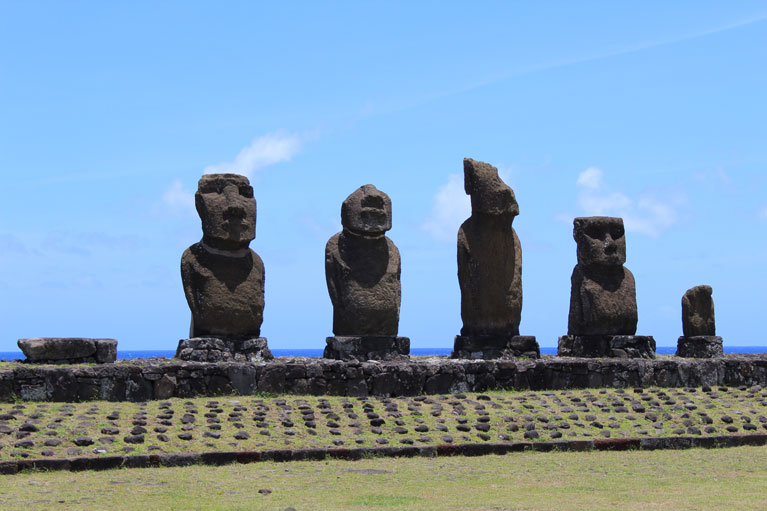 Moai in the eastern part of the island

The full day tour included many of the well-known moai sites: Akahanga, Au Tongariki, Rano Raraku, Te Pito Kura, and Au Nau Nau, along with a visit to the island’s only beach – Anakena Beach. We stopped for a picnic lunch at Rano Raraku and were visited by the resident dogs, chickens, and super cute kittens who got to eat some left overs. 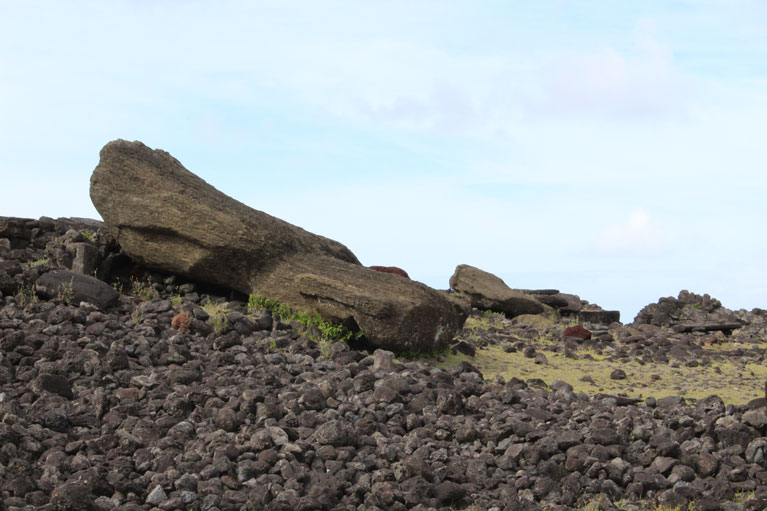 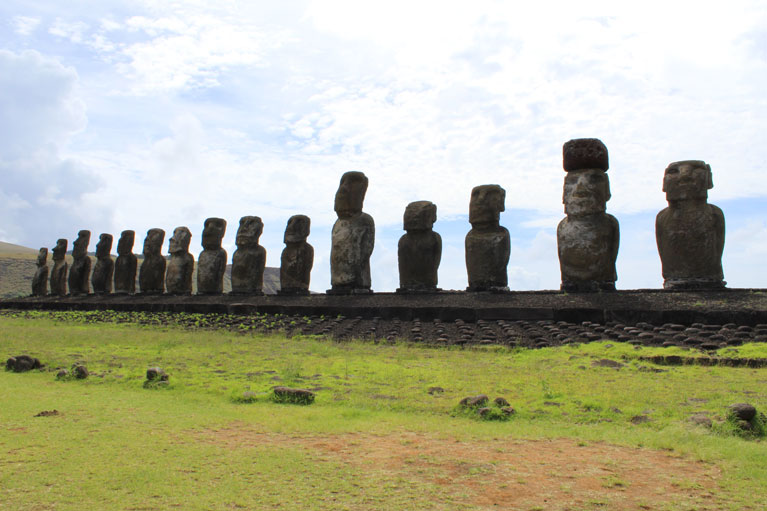 Rano Raraku is the quarry where most of the moai were carved. There are nearly 400 statues at Rano Rarraku in various states of completion. Some stand tall, while others lean toward the earth. Some are still a part of the volcanic mountain and look like they lie sleeping. 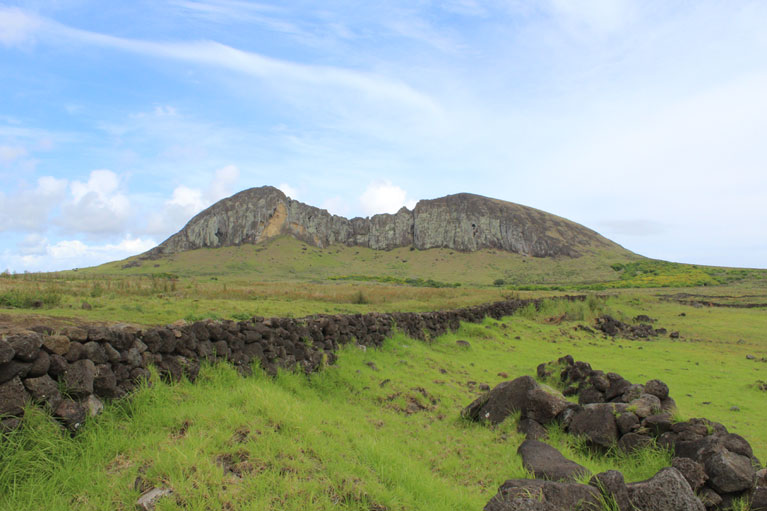 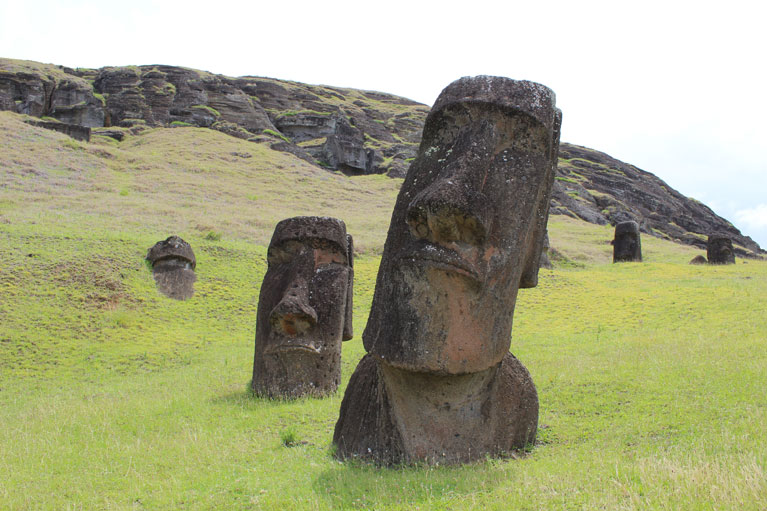 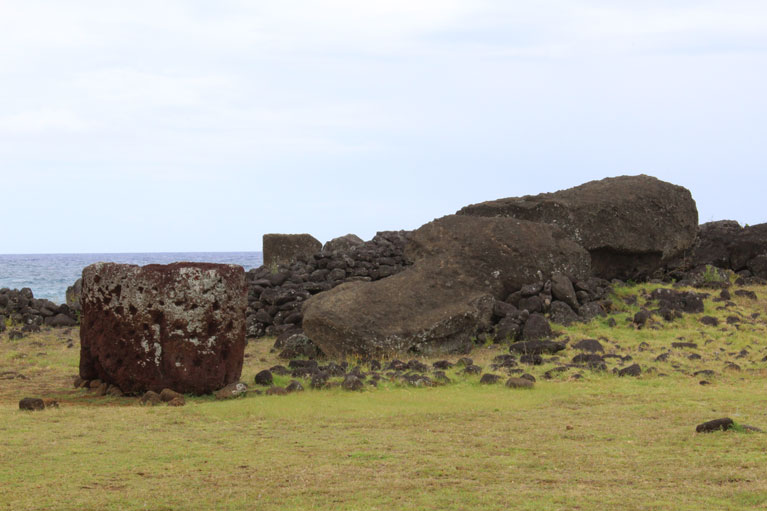 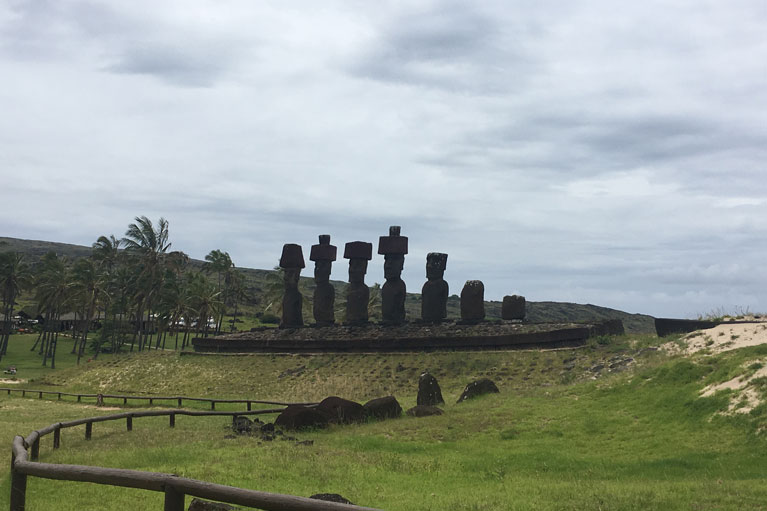 Southwestern corner of the island

A half-day tour took us to Vinapu, Rano Kau, and Orongo. 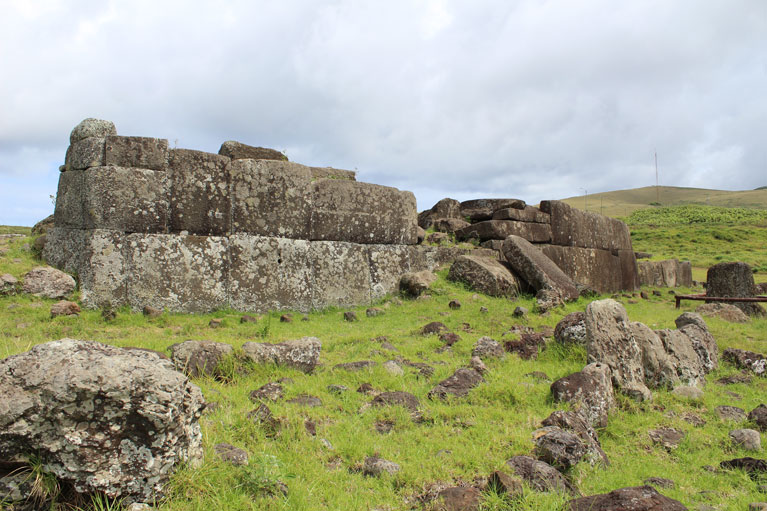 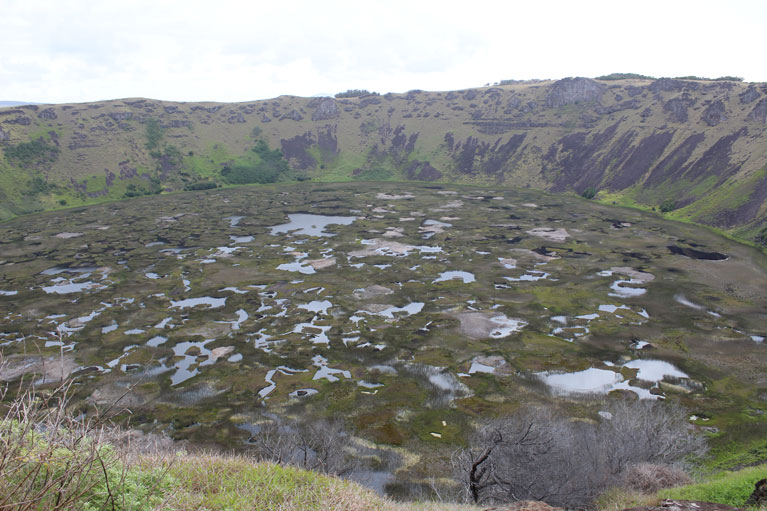 Orongo is the site of a ceremonial village where the Birdman cult (Tangata Manu) held their annual games. Clans competed to determine who would become the leader for the following year. Competitors climbed down the cliffs and swam to a small nearby islet, Motu Nui, to get an egg from the manutara bird (Easter Island seagull). The person who returned with an unbroken egg was the winner. 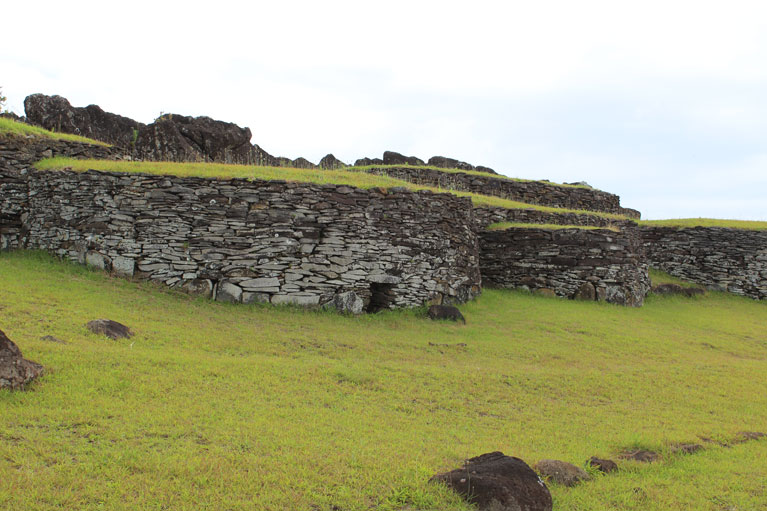 Don’t expect long stretches of white sand beaches on Easter Island. Nearly the entire coastline is hilly and rocky – and very pretty. There are a few tiny patches of rocky shore in Hanga Roa near Caleta Hanga Roa (the fishing port). The only beach is at the northern part of the island – Anakena Beach. Anakena is a great place to spend the day – take a look at the moai ahu and then find a good spot in the sand. There are several restaurants and bars, and a public bathroom (bring cash for the bathroom). 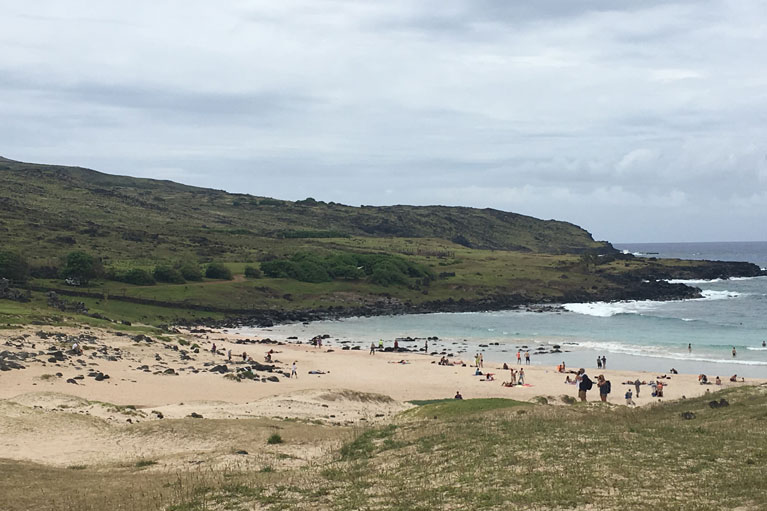 Hanga Roa – the Island’s only town

Hanga Roa is fairly small and easy to explore on foot. The shops, restaurants, bakeries, and church are on or near the main street – Te Pito O Te Henua. Although Easter Island is part of Chile, you can stop by the post office and they will stamp your passport with a Rapa Nui stamp (tip: the post office is not open all day, so check the hours before you go). If you need to check your email or post a quick photo on Facebook, head over to the free wi fi zone at the park in the center of town. 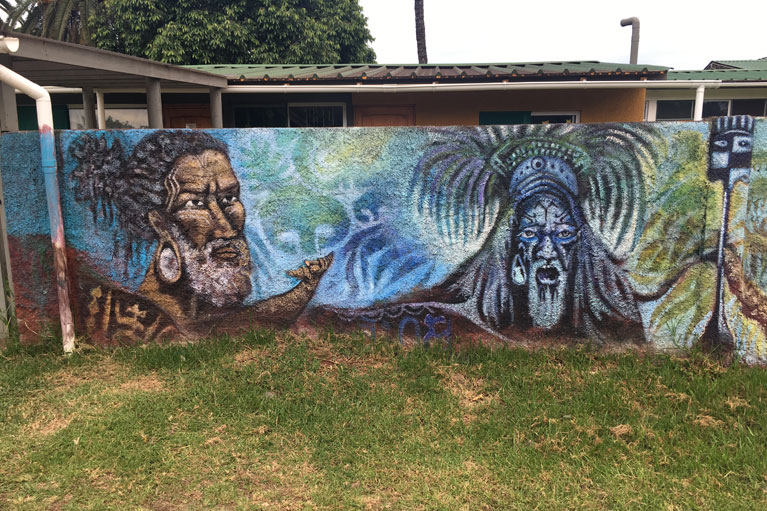 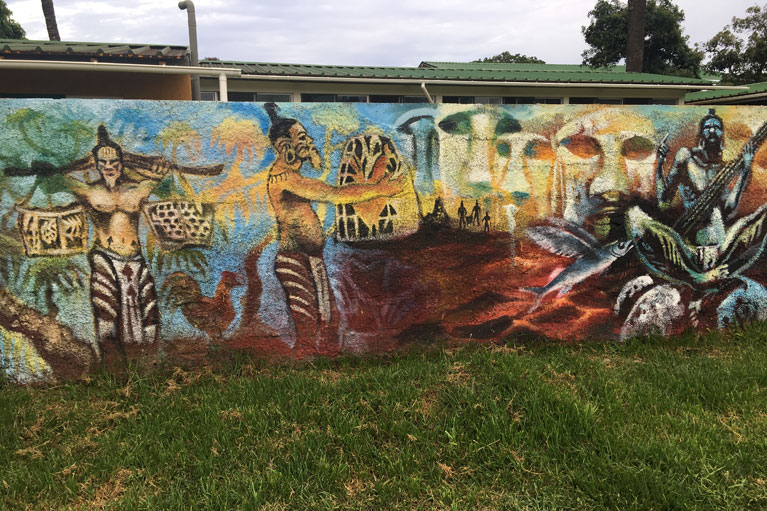 The Caleta Hanga Roa area by sea is a great place to hang out and watch the world. Grab a seat outside at Pea Restaurant and watch surfers, sea turtles, and dogs romping in the water. Or, for a quieter spot, head to La Kaleta at the other side of the harbor – listen to the crash of the waves, feel the wind on your face, and keep an eye out for brightly colored fish near the shore. 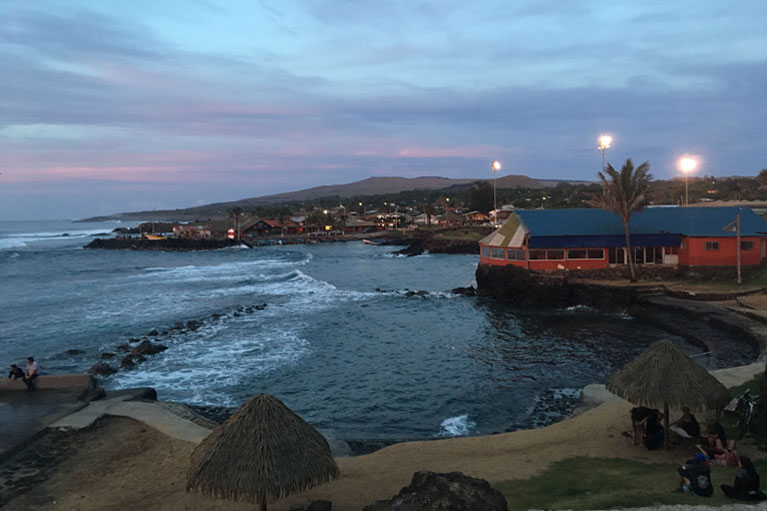 As we explored Rapa Nui, we saw lots of beautiful, friendly dogs. Most were large breed mixes that looked like German Shepard, Retriever, and other large types. I spent a lot of time watching the dogs. Some hung out in parks, some sat near people on benches, some romped in the water or chilled in the sand, others jogged behind people on bikes. I saw a lot of interaction between the dogs and people… a dog walked over to someone who gave a pat on the head, bite to eat, or played a game of fetch. I only saw two dogs on a leash the entire stay.

Many of the dogs looked to be in pretty good condition – not too thin and no obvious skin conditions, unlike some of the street dogs we saw in Thailand. I was curious to know if these dogs were in fact street dogs or if they had homes and the lifestyle on the island was for the dogs to wander freely during the day. I asked Marina, the server we saw twice at La Kaleta. She said that about half of the dogs are owned and half are not. The place she rents came with two dogs, which she now cares for. The restaurants put out food for the street dogs (which explains why we saw many hanging out near the restaurants) and the island has some programs to help the dogs. I did see one dog with an injured foot near the Mercado Arsenal. It looked like an old injury that was healing, but the dog walked with a limp. He must have sensed my interest because he walked over to us and started to cry softly. I considered luring him to the vet we had walked by on the main street and paying for his treatment. But I didn’t know if he was a street dog or had an owner – and perhaps he had already been treated and was healing. 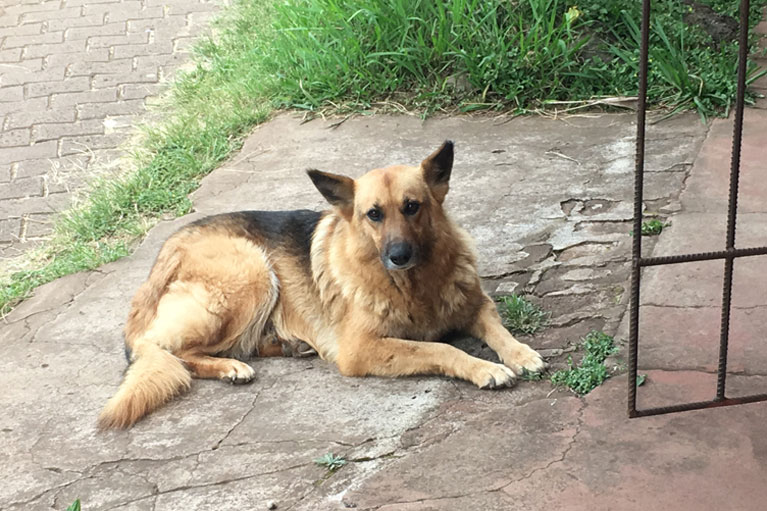 Dog chilling outside a shop in Hanga Roa 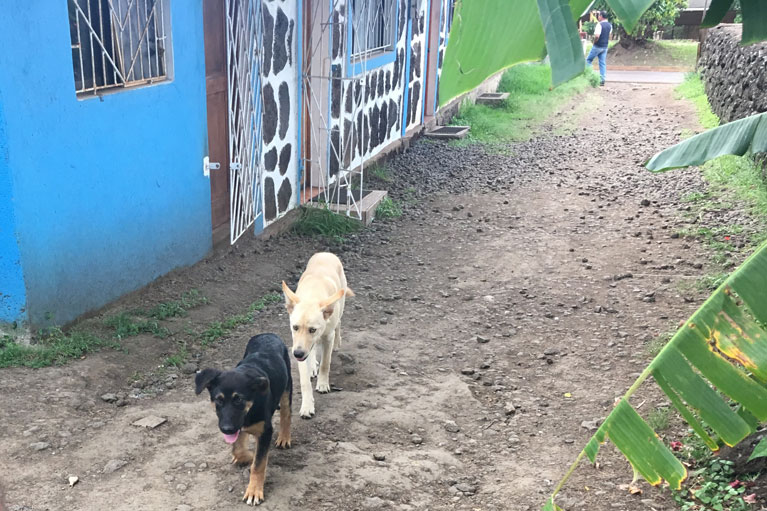 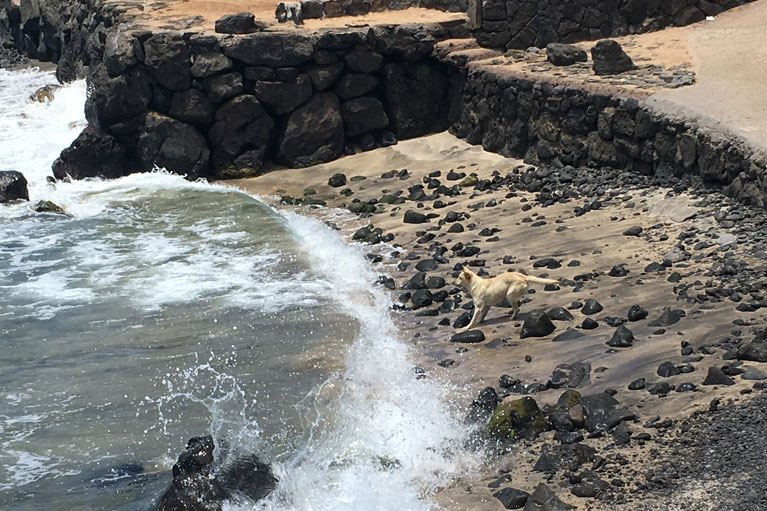 This guy had so much fun playing in the water

Maybe we weren’t in a shopping mood or maybe it is because we’ve been trying to stay clutter free at home, but we didn’t do any shopping. We peeked in the windows at several shops in town and found that most had similar items like moai statues, wood carvings, jewelry, and floral print clothing. The indoor Mercado Arsenal near the church had booths with similar souvenir-type items. See more about Easter Island shopping >

We didn’t find Easter Island to be a big foodie destination, but did enjoy some yummy fresh fish. We gravitated toward restaurants with an ocean view.

We went to La Kaleta twice for a snack (also see section on hanging out). One time we had a yummy tuna with sweet potatoes; the other time papas and shrimp in a rich, creamy sauce (a bit too rich for me). They also make a great pisco sour! We enjoyed talking with the server, Marina, a photographer from Mexico who is exploring the world with her boyfriend from Santiago.

We couldn’t resist the inviting outdoor patio with peek-a-boo ocean view at Mama Nui across the street from our hotel (Taha Tai). Lori’s tuna was very tasty, but Michael’s shrimp was just ok. The resident dog stopped by to beg for a while, but didn’t get any snacks from us.

We got take away from Haka Honu and peeked at the other dishes while we waited – they looked appetizing. The restaurant is a great spot to watch the sun set.

We spent a lot of time researching hotels. Our priorities were air conditioning, wi fi, and a convenient location. We stayed in a bungalow at Taha Tai. The hotel is in a good location a few blocks from town. The bungalow was spacious and comfortable, but basic, and had an outdoor patio (no ocean view though). The rate included a daily breakfast buffet and round trip airport transfers (the airport is five minutes from the hotel). When we arrived, there were some goodies waiting in the room – sparkling wine and moai shaped chocolates. 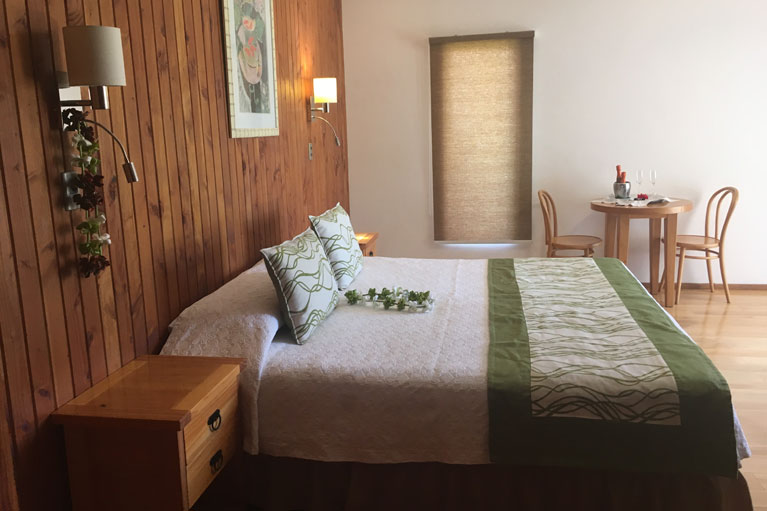 Getting to Rapa Nui

You can fly to Rapa Nui from Tahiti or Santiago, Chile. We flew from Santiago – there is only one flight per day. There was not enough time to make the connection from our international arrival, so we stayed at the airport hotel and took a flight the following day.

Many of the hotels on Easter Island don’t have air conditioning. So if you go in the summer and AC is a must for you, check the websites carefully before you book.

Here are some tips to help make your Rapa Nui sightseeing more enjoyable.

Read about Rapa Nui and the Moai Statues