Peru was the final destination on our world trip. We spent two weeks exploring Cusco and the Sacred Valley, and of course journeyed to Machu Picchu on the Hiram Bingham train.

High altitude head rush! When we stepped off the plane in Cusco, we immediately felt the effects of the 11,000 foot altitude. After a few days of rest, some oxygen, and lots of coca tea, we started to adjust. But, walking up Cusco’s steep hills always elevated our heart rates. The town is touristy, but that is not a surprise, given that it is the gateway to one of the most popular attractions in the world.

Getting from Colonia del Sacramento, Uruguay via Argentina to Cusco is expensive – most likely because few airlines fly the route. After much research and price comparison, here’s what we did…

We could have flown from Argentina to Cusco, connecting in Lima, in one day. But splitting the flights into two airlines over two days saved $400 per person on airfare.

Cusco is a UNESCO world heritage site due to its mix of Inca and Baroque architecture. As is the case with many colonial cities, when the Spanish conquered the area, they built around or on top of the Inca structures. The city has an interesting mix of grand churches and Inca ruins centered around the main square, Plaza de Armas.

Santo Domingo Cathedral / Qorikancha (Temple of the Sun)
We walked by, took some photos of the exterior, and almost didn’t go inside. That would have been a big mistake because it was a really interesting place. You can explore on your own or hire one of the independent guides who approach you outside the entrance. Don’t miss the adjacent church too. 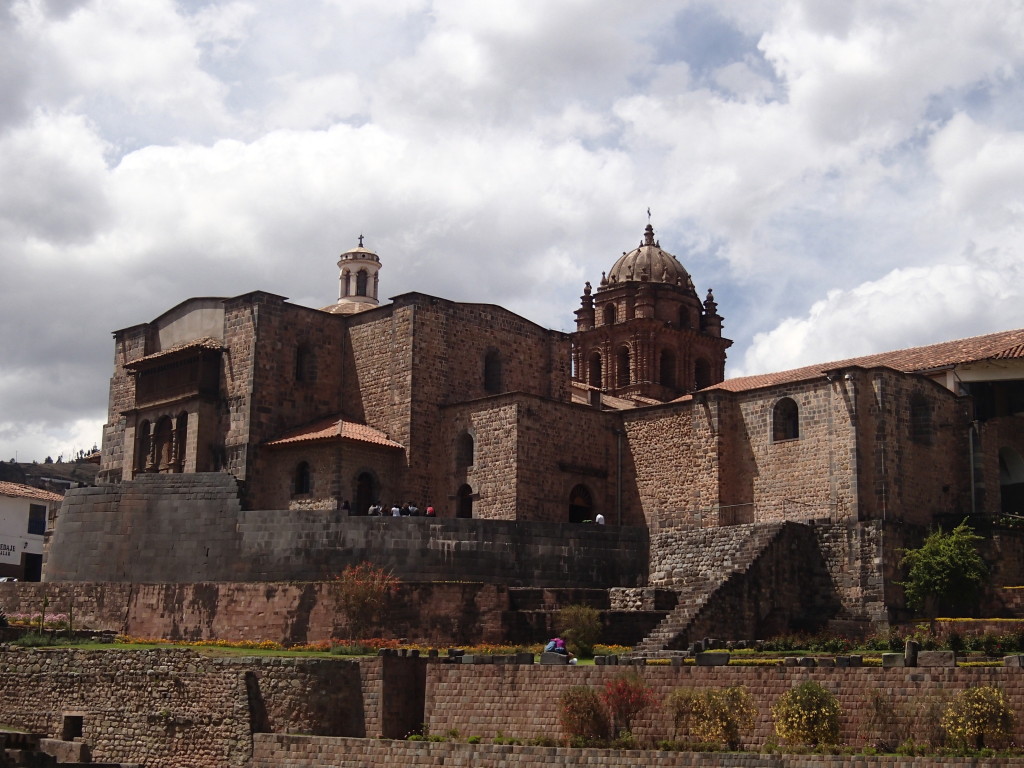 Saqsaywaman
When you pronounce the name of this expansive site in on the outskirts of town, it sounds like you are saying ‘sexy-woman’. There are four archaeological areas: Saqsaywaman, Q’enqo, Puka, Pukara, and Tambomachay (the admission ticket includes all four). We hired a taxi at the hotel and he drove us to the four sites and waited while we explored on our own. Saqsaywaman is the largest and most impressive. We also thought the cave and sacrifice table at Q’enqo was really cool. 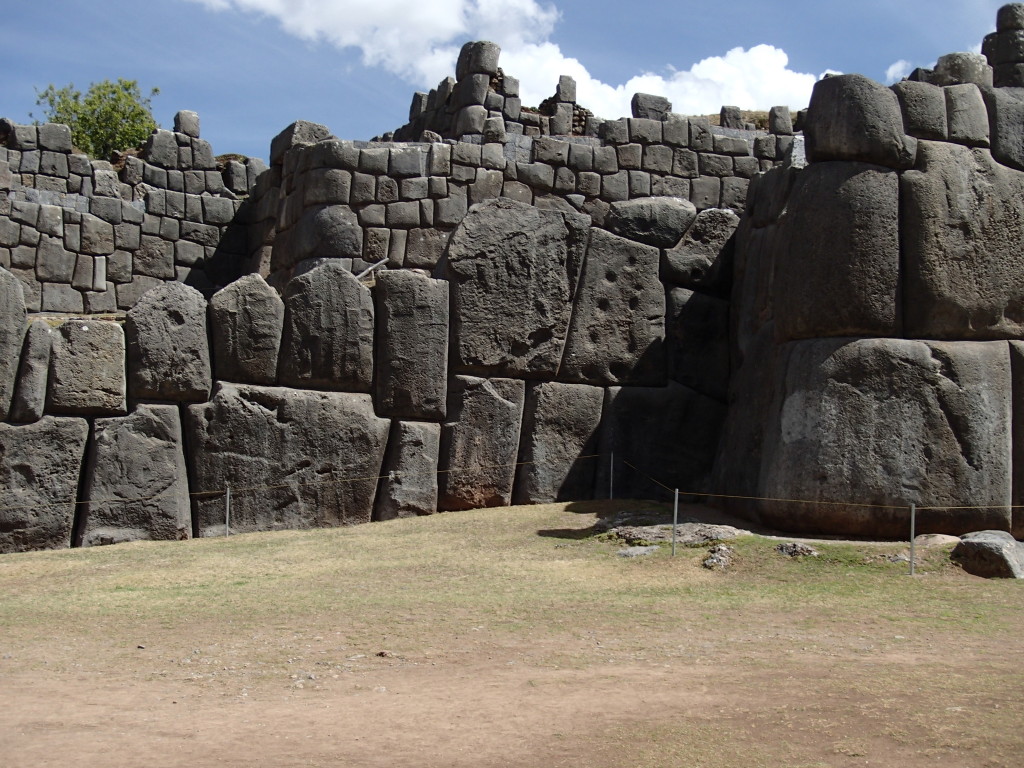 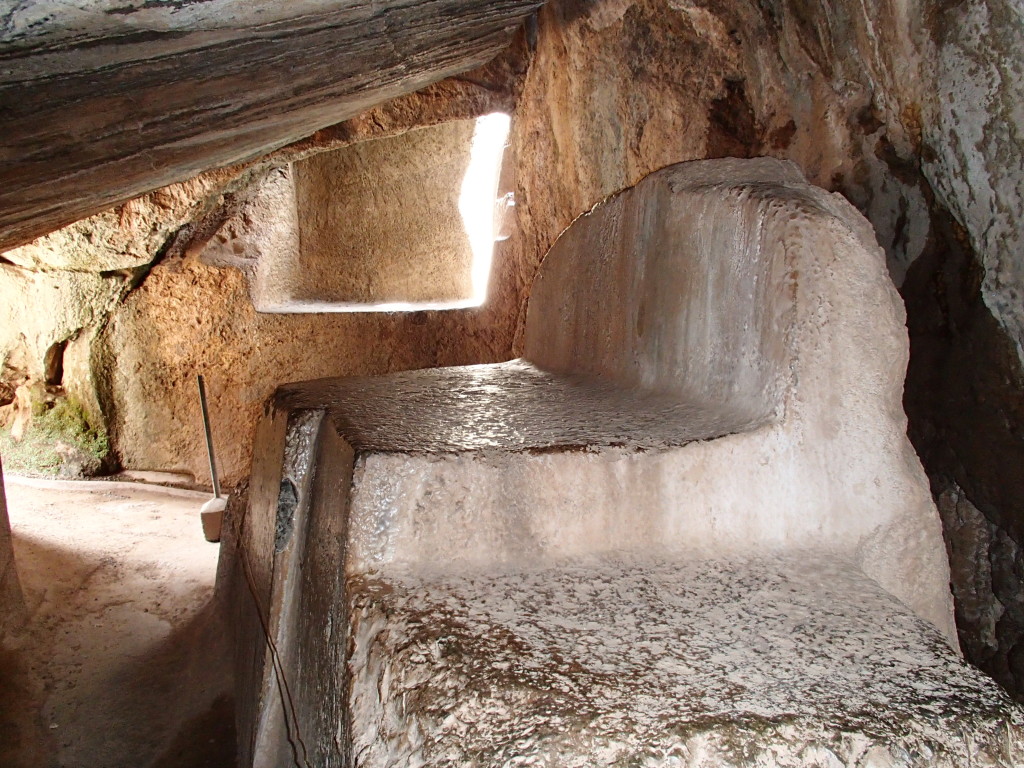 There are quite a few museums in Cusco – we checked out just a few.

Lori loved the Pre Columbian Art Museum because it had a wonderful collection of jewelry and sculpture.

The Museo de la Coca was more like an information center and shop than a museum, but worth a visit if you are interested in learning about coca. A staff member told us about the history of coca and showed us the traditional way to eat the fresh leaves with lipta (ash of quinoa, kiwicha, and kaniwa) – scrape some powder, wrap in 5-6 leaves, and then put between your teeth and gums.

The Center for Traditional Textiles has a nice display of the different types of traditional textiles and their history, and of course, a gift shop.

The Sacred Valley is a must see, especially the Urubamba River! We booked a group day tour through the hotel concierge, which gave us a whirlwind glimpse of this beautiful region with some touristy stops along the way. If you read the Rio de Janeiro post, you know how we feel about group tours. And, in hindsight, it may have been more enjoyable to pay extra for the private tour option. 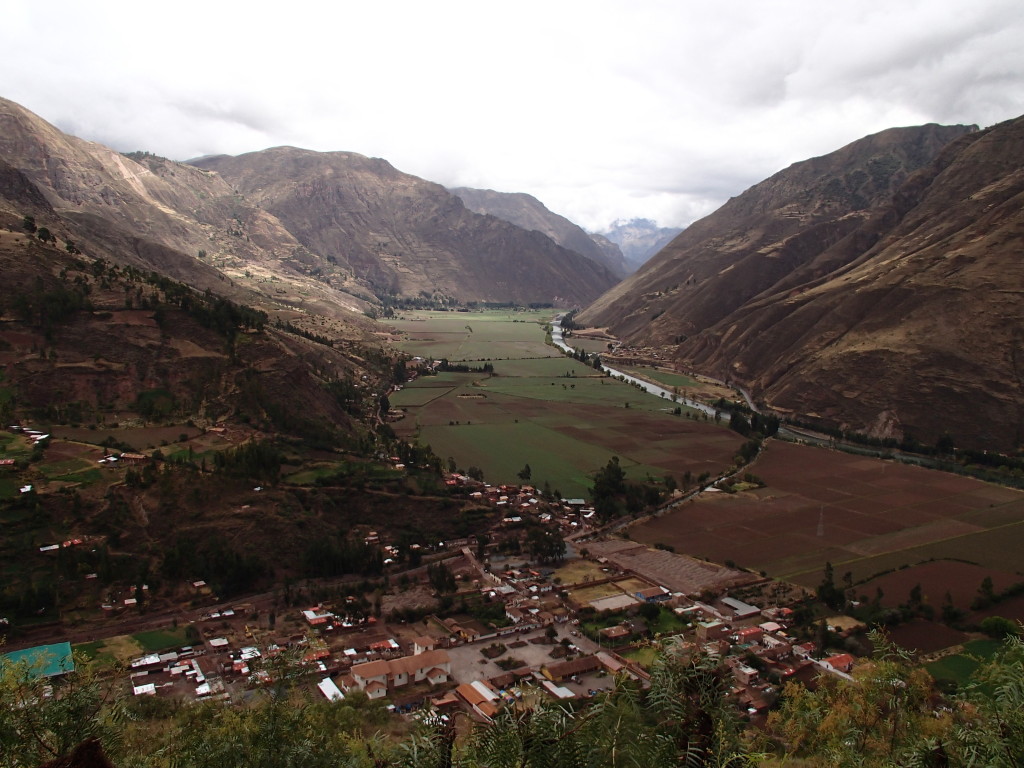 After a 45 minute drive from Cusco, we stopped at a souvenir market, which didn’t make sense because the next stop was the town of Pisac, which is known for its large market. The Spanish created the town in 1592 and made the Incas move there so they could keep an eye on them and collect taxes. After a short visit to Pisac (too short), there was another short stop at Awana Kancha, a weaving cooperative and alpaca farm. Then it was lunch time at a cute inn on the bank of the Urubamba River (it would have been a nice place to spend a night or two). On the way, we stopped to drop off part of the group at a different restaurant (the tour guide explained that each booking company picks the restaurant for their customers – strange).

Next, it was on to the archaeological site at Ollantaytambo, one of the highlights of the day. Our heart rate got going again as we walked up the steep steps to the top of the Inca city ruin. Then we took another detour to drop a few people at different hotels. By then, it seemed that the remaining group was ready for a nap and ride home, but we had one more stop – the colonial town of Chinchero. During the quickie tour we visited a weaving co-op / shop and a cool church with elaborate alters and lots of fresh flowers. And then everyone stretched out in the van and snoozed for the one hour drive back to Cusco. 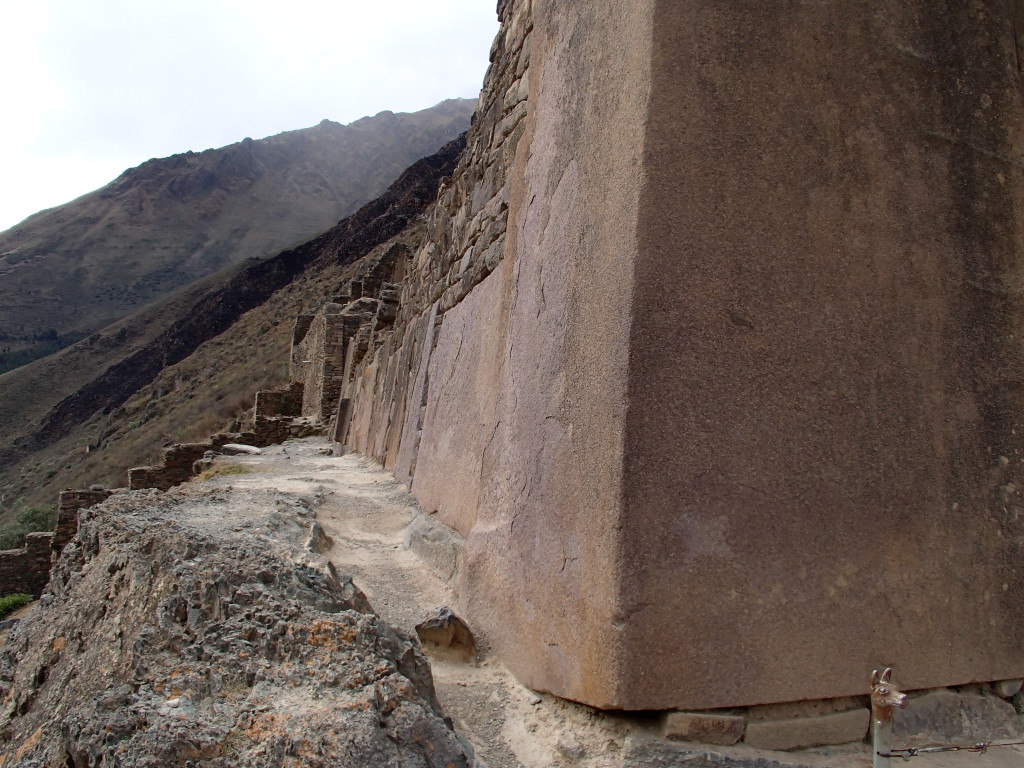 There are many ways to visit Machu Picchu – we splurged on a round trip ride on the Hiram Bingham train. 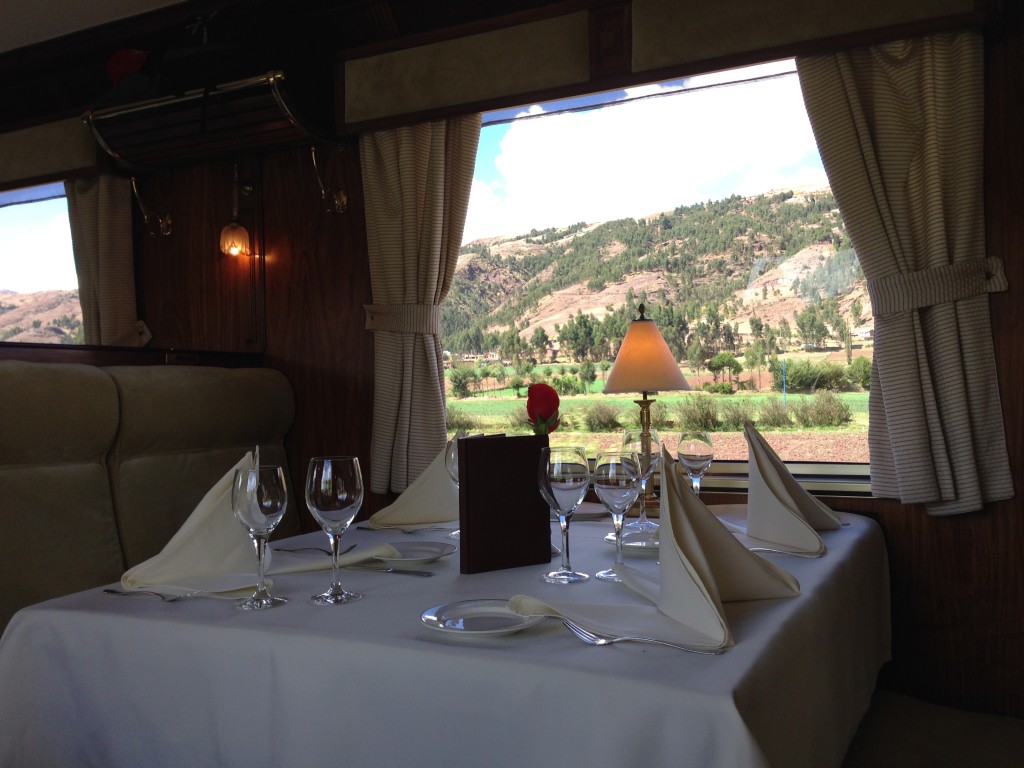 Our seat on the train

The day started with a 20 minute taxi to the train station in Poroy for the 8:30 AM check in. Michael and the taxi driver, Renato, discussed sustainability and how the Incas lived in harmony with the environment. (We later tried to reach Renato to hire him for a day trip, but he never returned our email.) During the three hour train ride, we watched the beautiful countryside from the observation deck in the bar car, listened to live music, ate a big brunch, and had a wee bit of champagne. The train stopped in Aguas Calientes, a cute town at the base of the mountain, from which buses depart for a 15 minute drive up a narrow, winding road to Machu Picchu.

After some confusion over which bus to take and a wait for the rest of our group, we set off with the guide. We walked up a winding, path and then we saw it – wow! Did we say wow?! We spent the next three hours exploring the incredible Inca site and learning about its history. After the tour, the group stopped for tea at Inkaterra, the only hotel at the top of the mountain. Then it was back to the train for the ride home. We headed to the bar car for cocktails, then a group gathered as the musicians got everyone involved. After dinner and more cocktails, the long journey came to an end at the Poroy station. 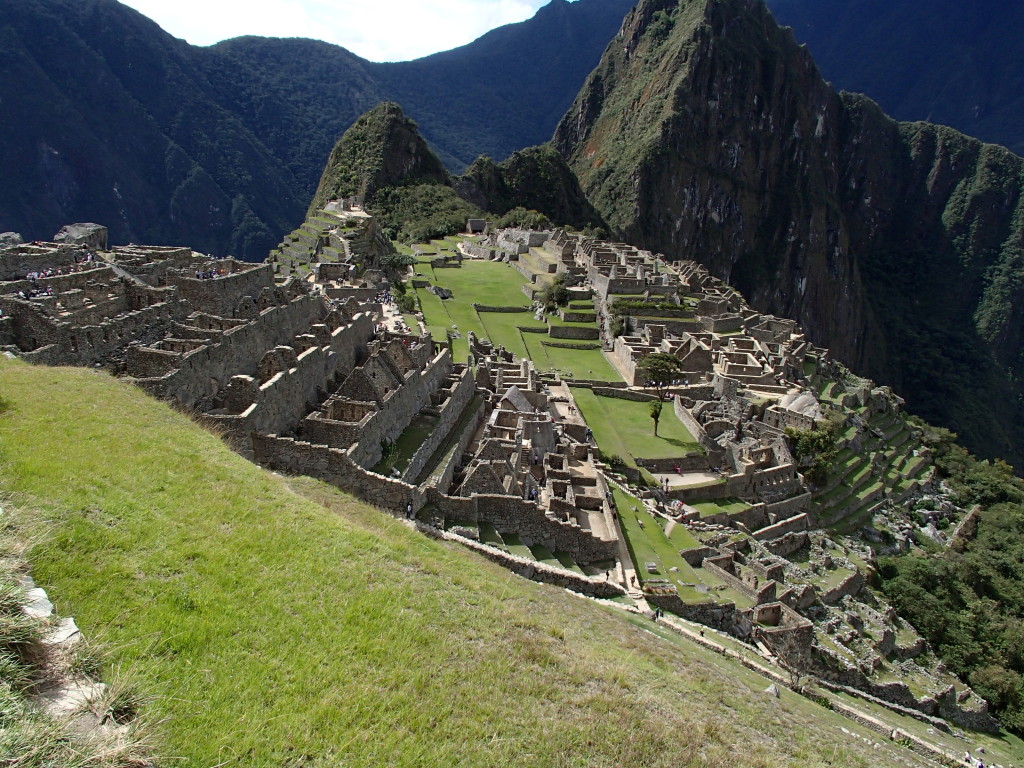 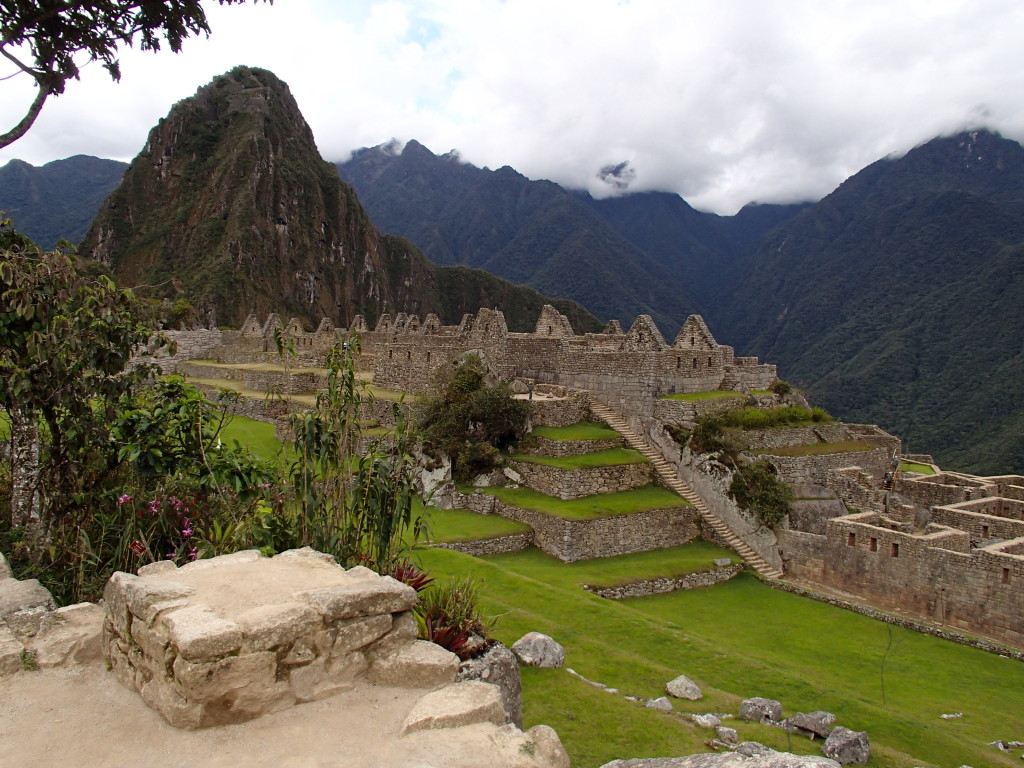 We learned some interesting things about the local culture…

Some people put an offering on the roof of their house for harmony and fertility. It is a little sculpture with a cross, two bulls to symbolize plowing the fields together, and two pots – one for food and one for water.

The Inca used coca leaves in ceremonies as offerings to the three worlds (sky, earth, underworld).

The Inca used a ceremonial knife, tumi, to sacrifice black lamas and to perform brain surgery on people.

Parades are big in Cusco! We saw several parades in the Plaza de Armas – some big and some small. Many appeared to have a religious theme. One night, there was a group of cute kids dressed in white. Another night, kids and parents marched carrying brightly colored lanterns. There was a biggie one afternoon, which appeared to be a mix of different themes ranging from religious to a celebration of the beer bottle. 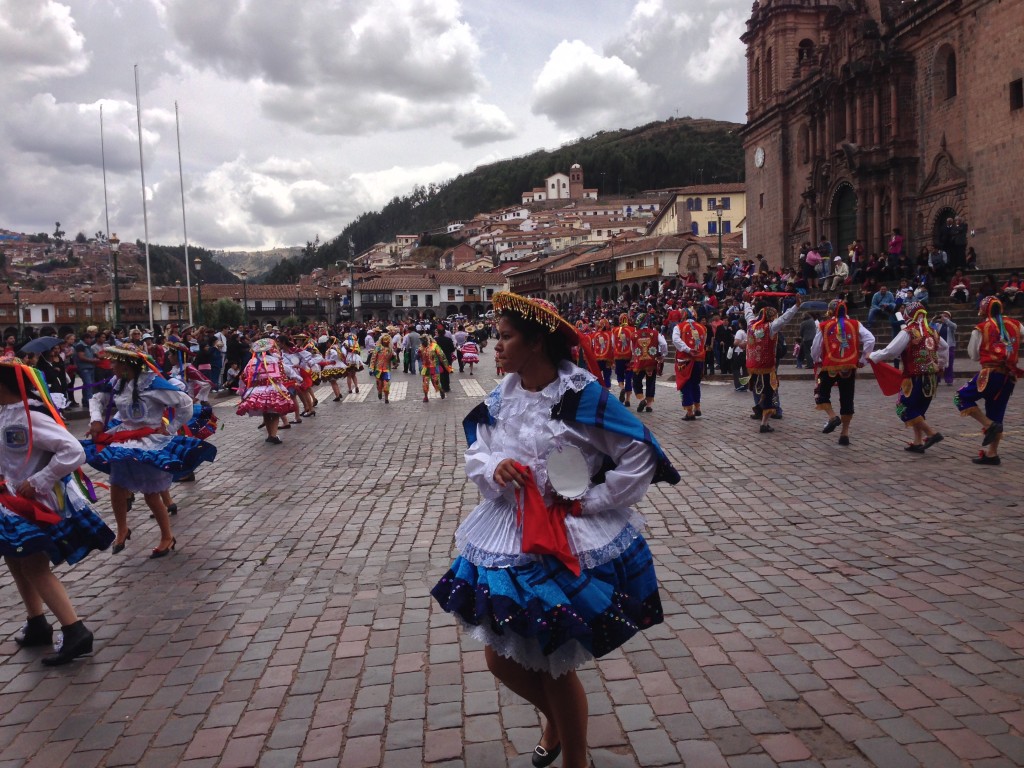 Cusco is a shopper’s heaven – there are textile, jewelry, and souvenir shops, outdoor markets, and street hawkers everywhere. Actually, there were so many similar items that we got overwhelmed and a bit turned off. But there were a few shops that stood out.

Eating and Drinking in Cusco

If you are an adventurous meat-eater, you can try alpaca, llama, and guinea pig (Michael tried alpaca). If you prefer veggies and grains like Lori, there’s quinoa, giant corn, and 300 types of potatoes. The local liquor is pisco – a really, really strong brandy. The popular cocktail, pisco sour, is made with simple syrup, lime juice, and egg whites – tasty but rich. The hotel where we stayed had a big jar of strawberry-infused pisco which is great straight up. 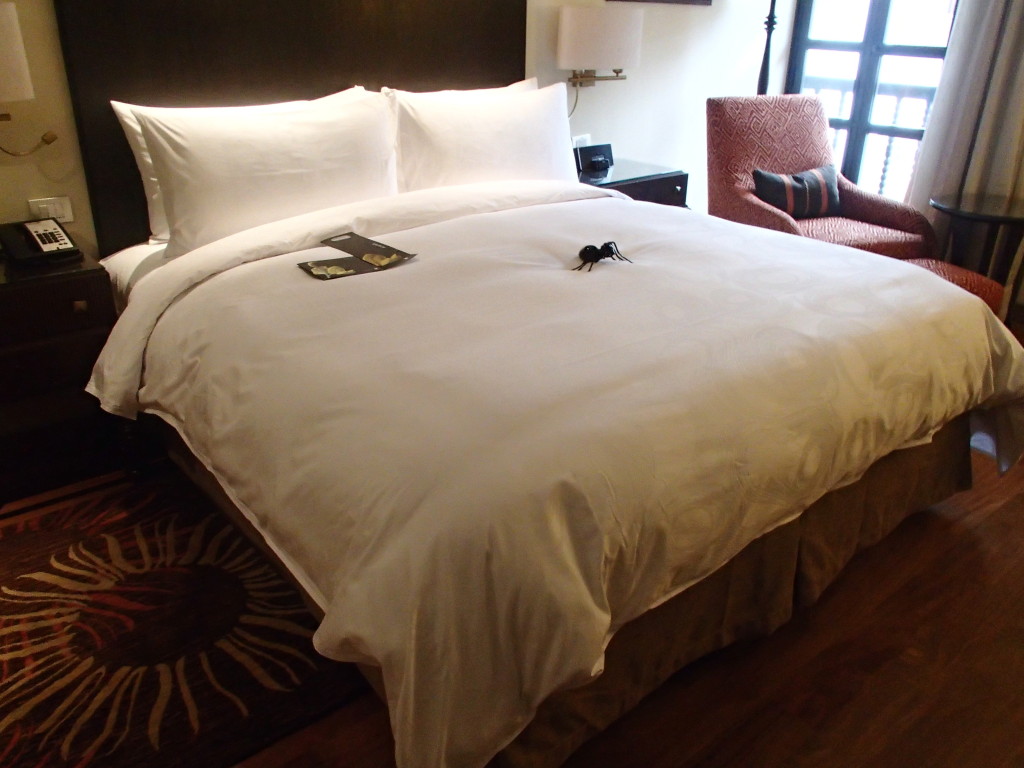 Getting there: There is no international airport in Cusco, so you will fly to Lima and then take a short flight to Cusco. (However, one of the tour guides said there are plans to build an international airport in the Sacred Valley in two years.) Get ready for a head rush when you get off the plane. Also be ready to be bombarded by tour operators (one of our biggest pet peeves). It is easy to grab a taxi from the airport, which is just a few miles from the center of town. Note: a taxi from the airport costs way more than a comparable ride anywhere else in town.

Altitude: We really, really emphasize this tip… really. Plan to arrive 1 – 2 days in advance so you can rest and adjust to the altitude before sightseeing. We were useless the first day, but after rest, coca tea, and oxygen, we felt ok. But Lori did have an intermittent headache the whole time. On the Sacred Valley day tour, a couple in their 50s had just flown in from Lima; the husband got altitude sickness and spent the entire day lying down in the back of the tour bus.

Weather: During our October visit, the weather in Cusco was all over the place (chilly, warm and sunny, rain storm) – often in the same day. Bring layers and rain gear and be ready for anything.