Antoni Gaudi had a unique design aesthetic that infused organic shapes inspired by nature into modernist styles. He used recycled and low-cost materials like ceramic tiles, glass, and iron. It was interesting to learn that he was on the forefront of sustainable design.

Some of Gaudi’s most spectacular designs are in Barcelona. We visited Park Guell, Casa Batllo, La Pedrera, and of course Sagrada Familia – which is down the street from our flat. Along the way, we noted some tips that can help you plan your visit (see Travel Tips section at the end of this post).

Antoni Gaudi was born in 1852 in Reus, Spain. He became interested in nature, history, and design and studied architecture at University in Barcelona. As a student, Gaudi worked in the studios of established masters Francisco Paula de Villar and Josep Fontseré. After graduation, people took notice of Gaudi’s work and hired him for custom commissions. He designed many modernist buildings and structures throughout Spain. In 1926, at age 74, Gaudi was hit by a tram on the way to work at Sagrada Familia and died several days later. His body is interned at Sagrada Familia, which is still under construction today. See Antoni Gaudi biography > 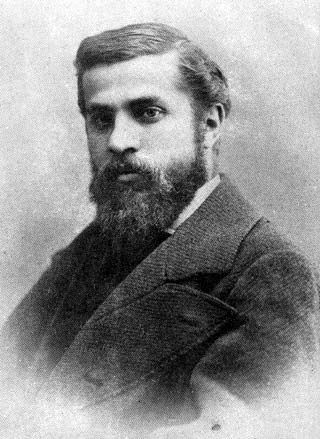 Park Guell is located high in the hills of Barcelona and has wonderful views of the city and sea. The site was a collaboration between several architects and designers. Eusebi Güell i Bacigalupi originally planned to build a gated community of 60 homes for aristocrats, but there was little interest. Gaudi bought one of two homes that were constructed and lived there until his death. Guell gave the private gardens to the city in the 1920s and they were turned into a public park. 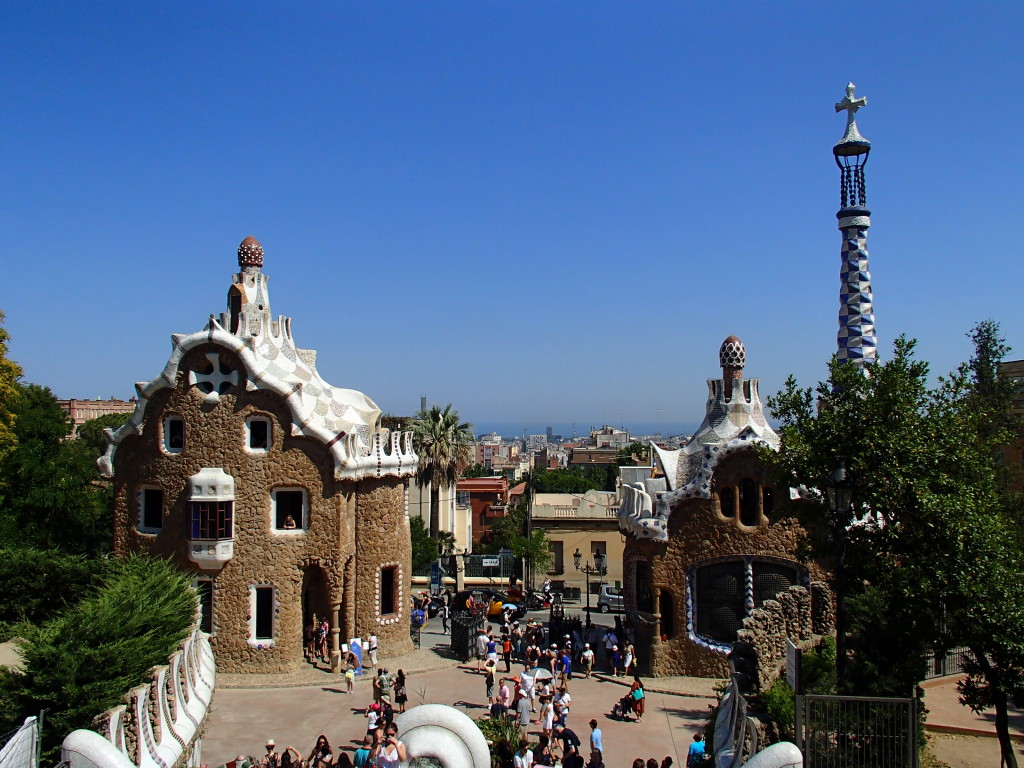 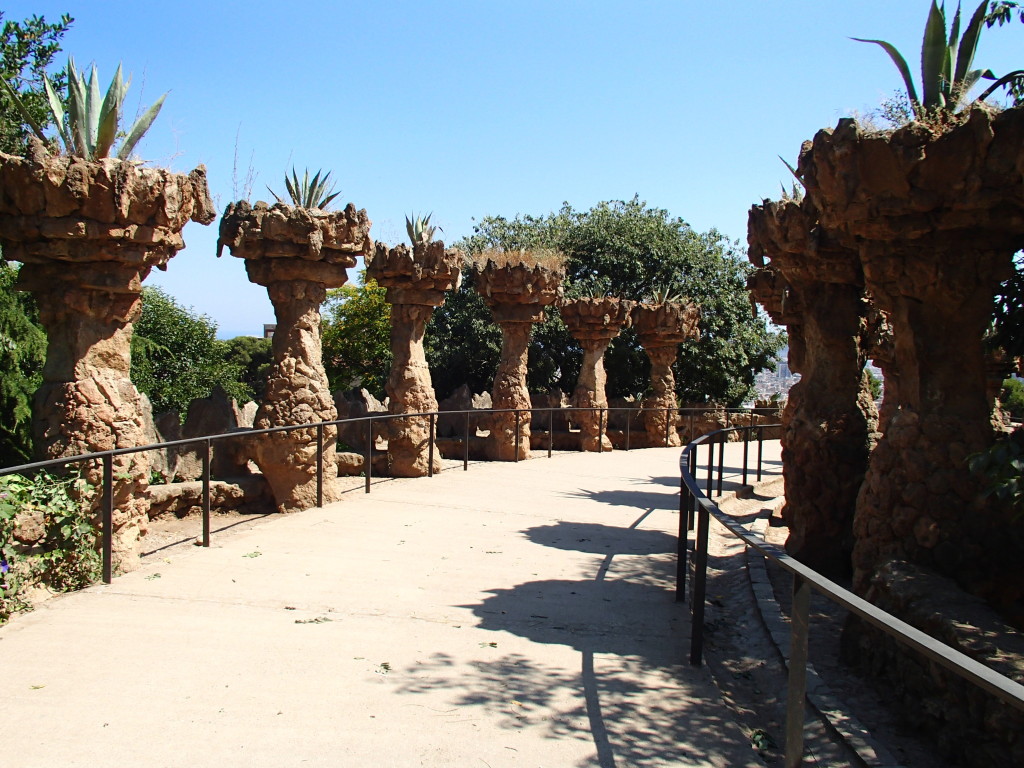 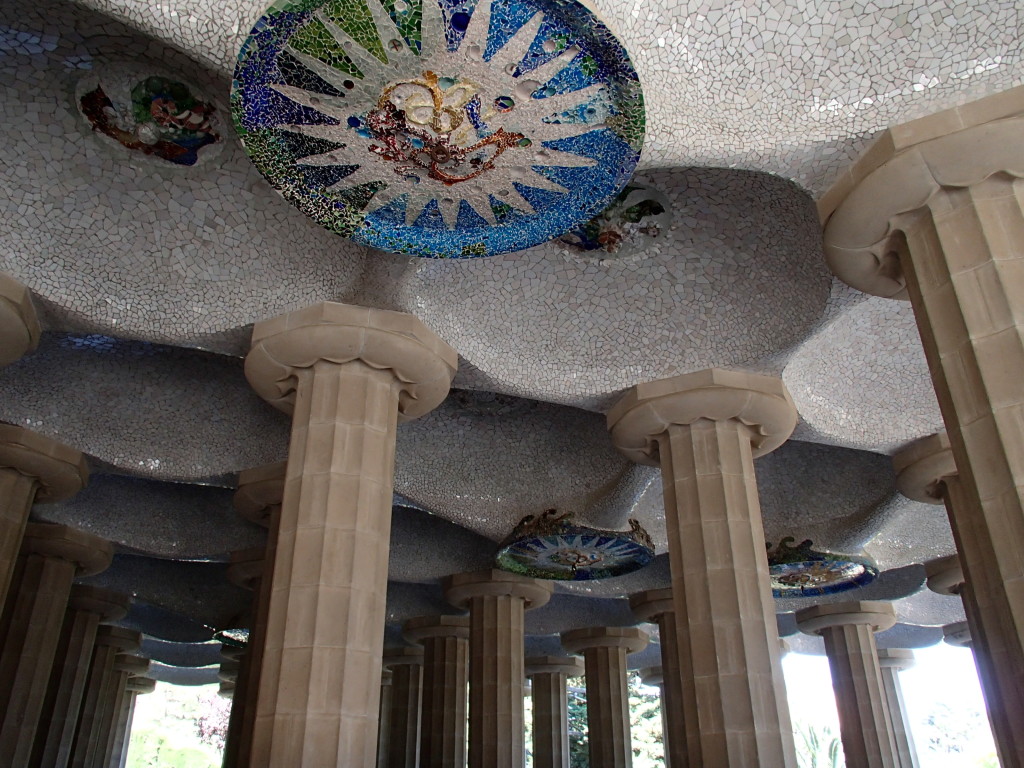 Josep Batlló i Casanovas hired Gaudi to renovate his family’s home in the center of Barcelona on Passeig de Gràcia. Work began on Casa Batllo in 1904 and finished in two years later. The family lived in the home until the 1950s, at which time an insurance company bought it to use for offices. Over the next 50 years, ownership changed hands and the building was restored. In the early 2000s, the building was opened for public tours. Read more about Casa Batllo > 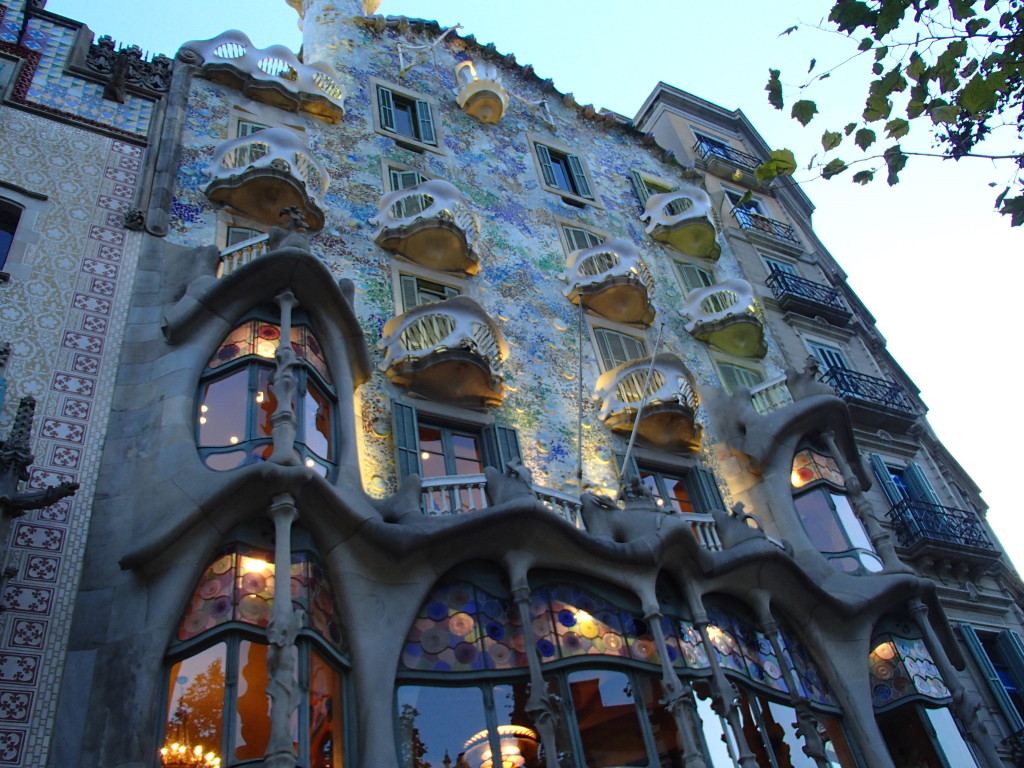 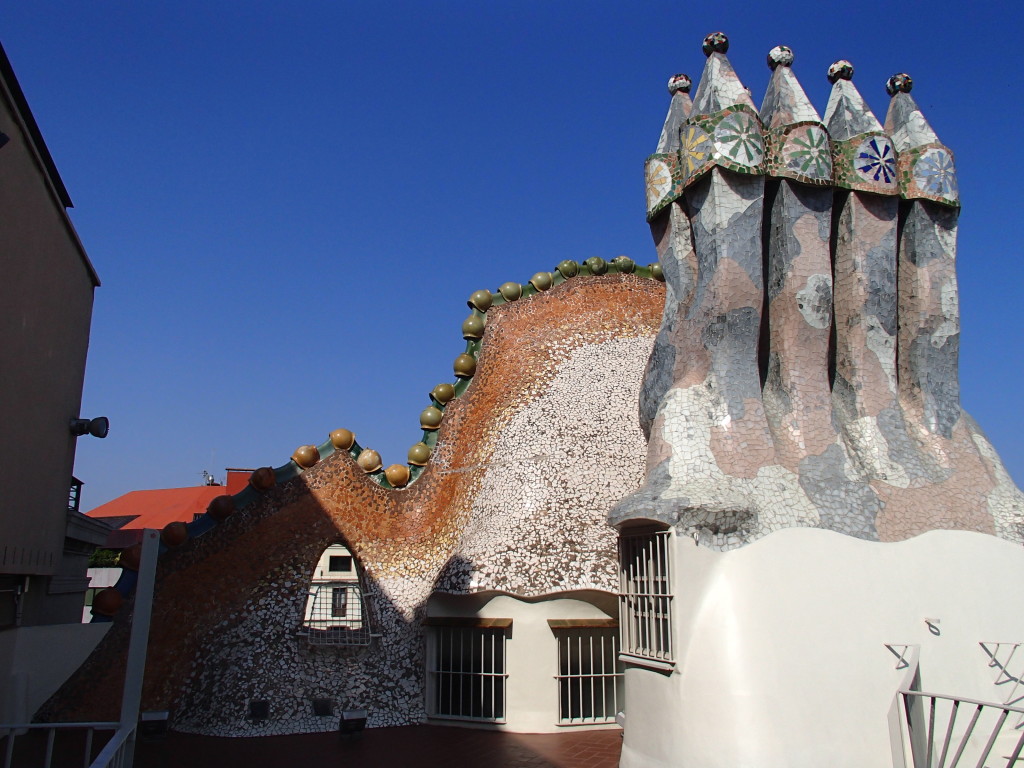 Pere Milà i Camps hired Gaudi in 1906 to design a family home with rental apartments on Passeig de Gràcia in Barcelona. The building got its nickname La Pedrera because it looks like an open quarry. In 1984, La Pedrera became a UNESCO World Heritage site. It is currently a cultural center that hosts exhibitions and events. Three areas in the building are open for public tours (we just looked at the exterior). 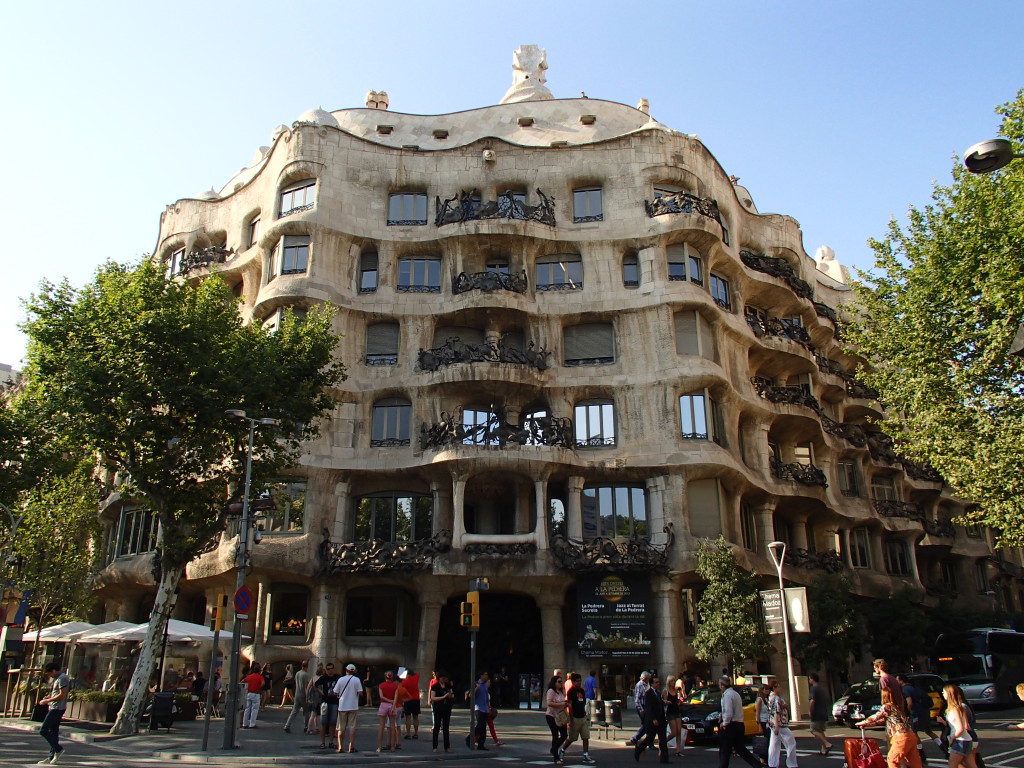 In 1882 construction began on Basilica Sagrada Famila under the direction of architect Francisco de Paula del Villar. Gaudi took over the following year and continued to manage the project until his death. As of today, work still continues on the unfinished basilica. While the exterior is striking, the cranes, scaffolding, and drapes are a big distraction. The interior is more finished and well worth a visit. You can see the Basilica only or include one or both towers; we opted for the Nativity tower. An elevator ride takes you to the top, which is 20 – 25 stories high. Then you walk down a narrow, spiral staircase of approximately 400 steps where you get a close up look of the exterior details and some great views of the city. The exhibit, Enjoy Nature, describes the inspiration of Gaudi’s organic architecture. It was interesting to how nature is a key element of his work. For example, the shape of the ironwork was inspired by bee honeycombs. See the history of Sagrada Familia 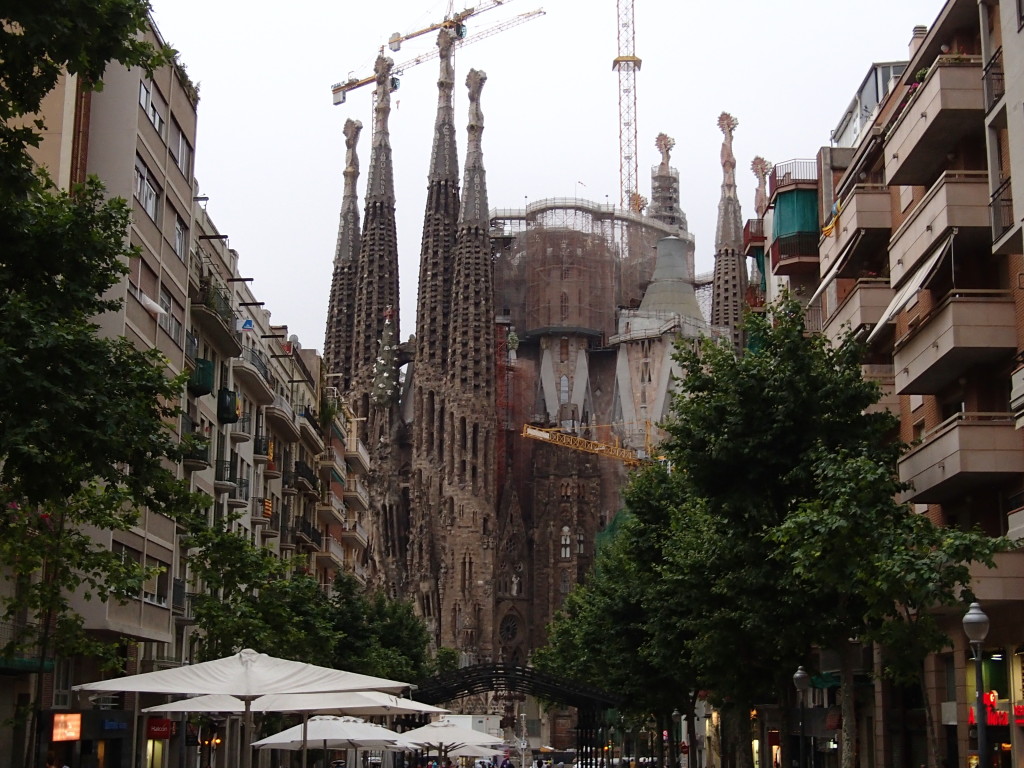 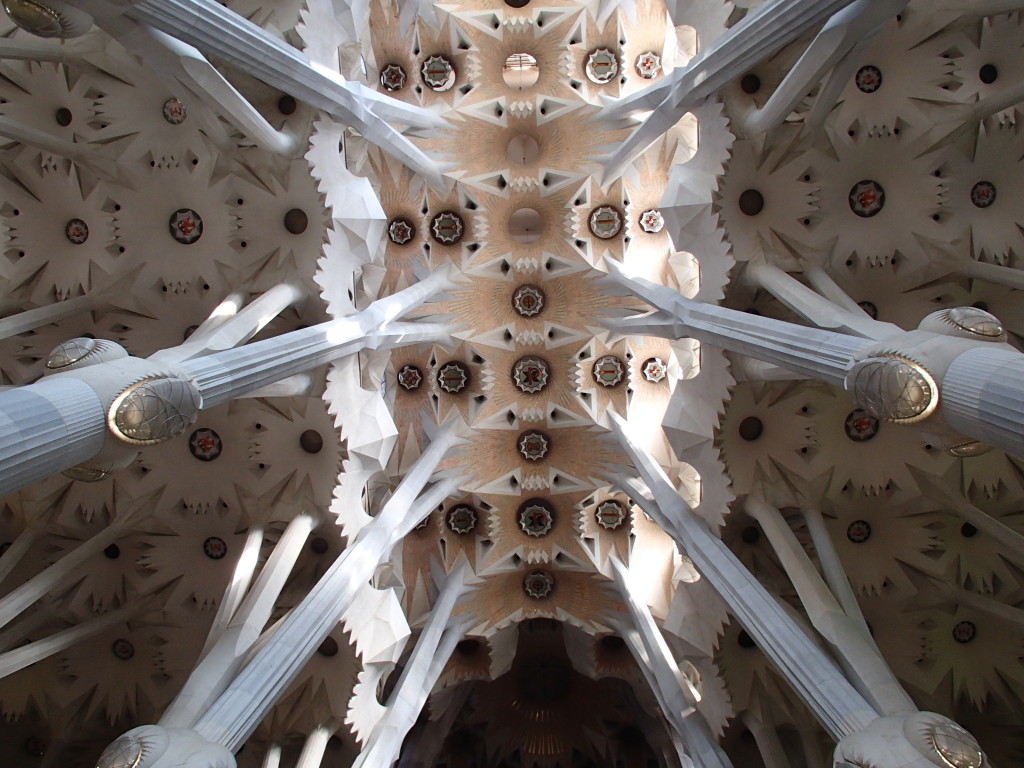 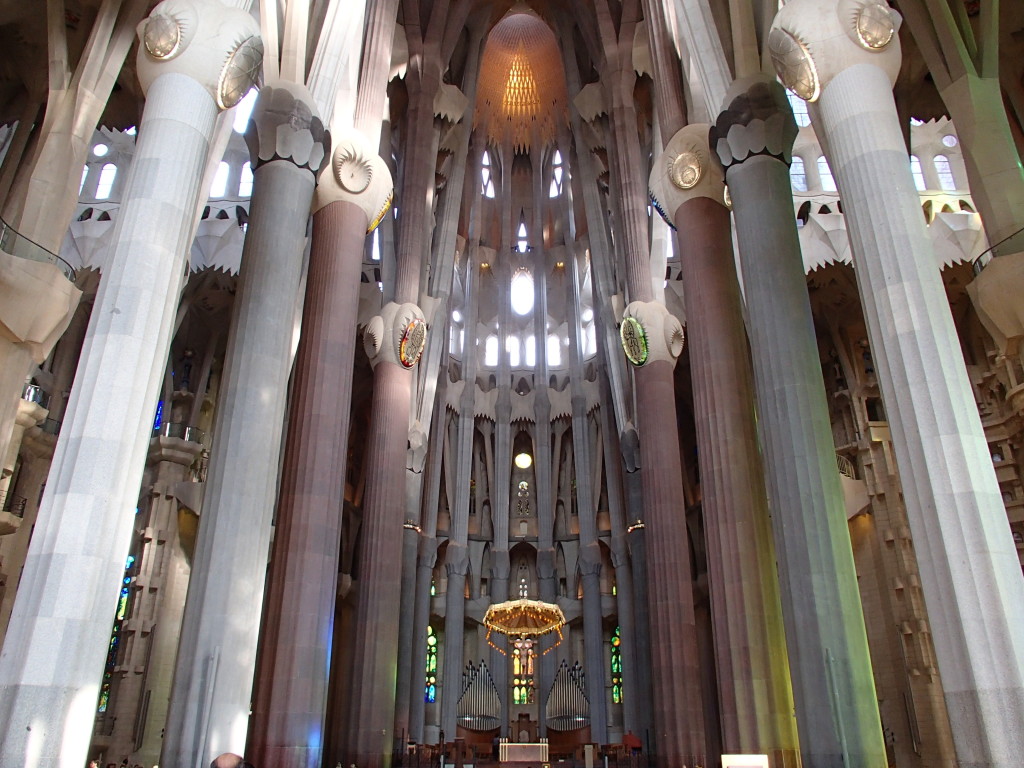 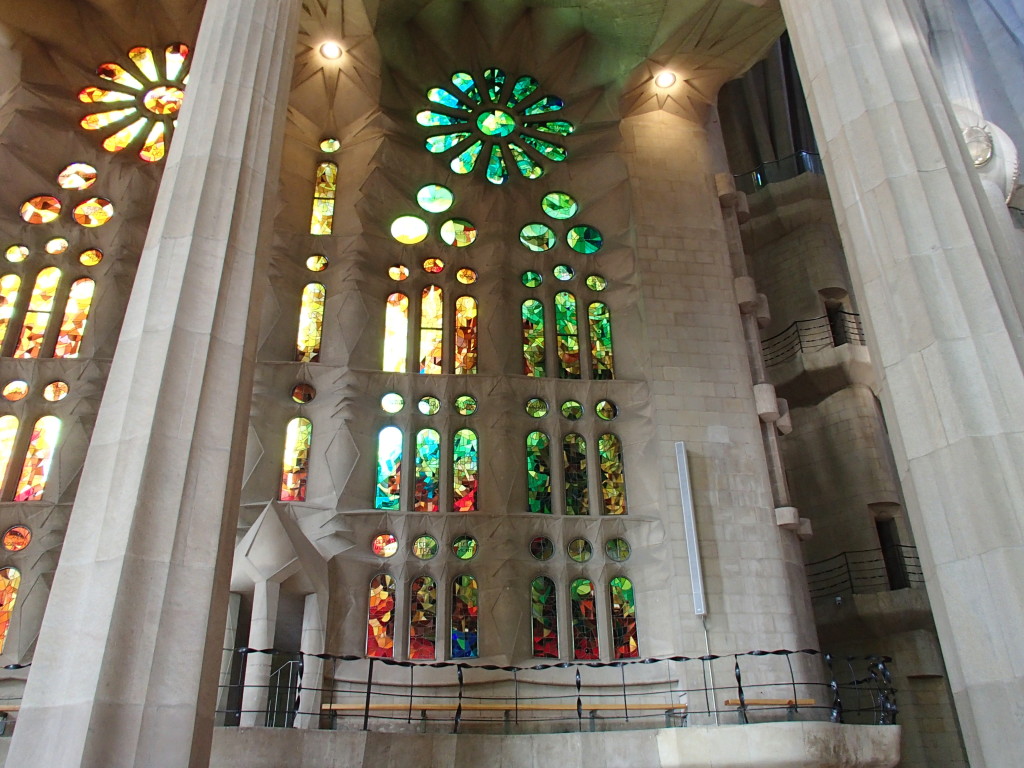 Gaudi sights are very popular and crowded (we watched a constant parade of groups pass by our flat on the way to Sagrada Familia). When you visit the buildings, you may encounter long lines to get in. Save time and buy tickets online so you can skip the ticket queue and go right to the entrance.

Casa Batllo: Buy tickets online, download and save the pdf receipt, email it to yourself, and then go to the online ticket entrance and show the receipt on your phone. Easy. (Make sure you go to the entrance that says online tickets – don’t wait in line at the other entrance where people are buying tickets.)

Sagrada Familia: You can buy tickets online but there is a different process than Casa Batllo and it is a bit more involved. To visit the Bascilica only, pick a date and arrival time range, e.g., 9:00 – 10:00 AM. If you want to visit the towers, you have to pick a day, specific time, and tower (two towers are open: Passion and Nativity). You must also print a hard copy ticket to present at the gate. We didn’t have a printer, so we went with the other option. At some La Caixa banks there are kiosks where you can purchase or pick up (print) tickets – you must bring the credit card you used to buy the tickets online and it must have a pin number. We had trouble printing our tickets – we followed the onscreen directions but kept getting an error message. We thought the machine might be broken, so we walked a few blocks to another branch and had the same result. Back we went to try again one last time – and then we saw a piece of paper taped to the wall next to the kiosk (and several inches above the line of sight of the machine screen). At the top it said, Sagrada Familia Tickets, followed by instructions in several languages. The instructions had completely different steps than the onscreen instructions. We tried again and it worked like a charm – geez. Here is a recap of the tips for how to buy tickets for Sagrada Familia.

Park Guell: Free admission to the park, but there is a fee to visit the museum (we did not go inside).

Note: As an Amazon Associate I earn from qualifying purchases.