Tranquilo on the Rio de la Plata in Uruguay

After four weeks of city life in Buenos Aires, we savored ten days in this laid back riverside town. We strolled along the river, explored the UNESCO World Heritage historic quarter, saw lots of stray dogs, and watched beautiful sunsets from our balcony.

Many people visit Colonia del Sacramento as a day trip from Buenos Aires because it is so easy. Just hop on the ferry for a one hour ride across the river and then take a short walk to the historic quarter of town. We had a ten day window between Buenos Aires and Peru, and while there were many appealing options like Puma Punku in Bolivia (some day), we preferred a destination that was easy and cheap to reach from Argentina (flights within South America can get pricey). While researching Buenos Aires a few months back on the Fodor’s forum, a helpful guy suggested that we visit Colonia. After checking out the ferry, we decided it was a great option; and it turned out to be just that.

The Portuguese founded the town of Colonia del Sacramento in 1680 and after several battles back and forth, the Spanish took over. The historic quarter was named a UNESCO World Heritage site due to the urban layout and architectural styles. The area is surrounded by the river on three sides, providing nice water views at many turns. Narrow, bumpy cobblestone streets lead into small plazas. As you explore, you will see the old town gate, city wall and government house ruins, cannons, a lighthouse, and the basilica. Some of the buildings have been restored into shops, restaurants, offices, and homes; others lay vacant… We daydreamed about the cool things that could be done with some of the vacant structures. 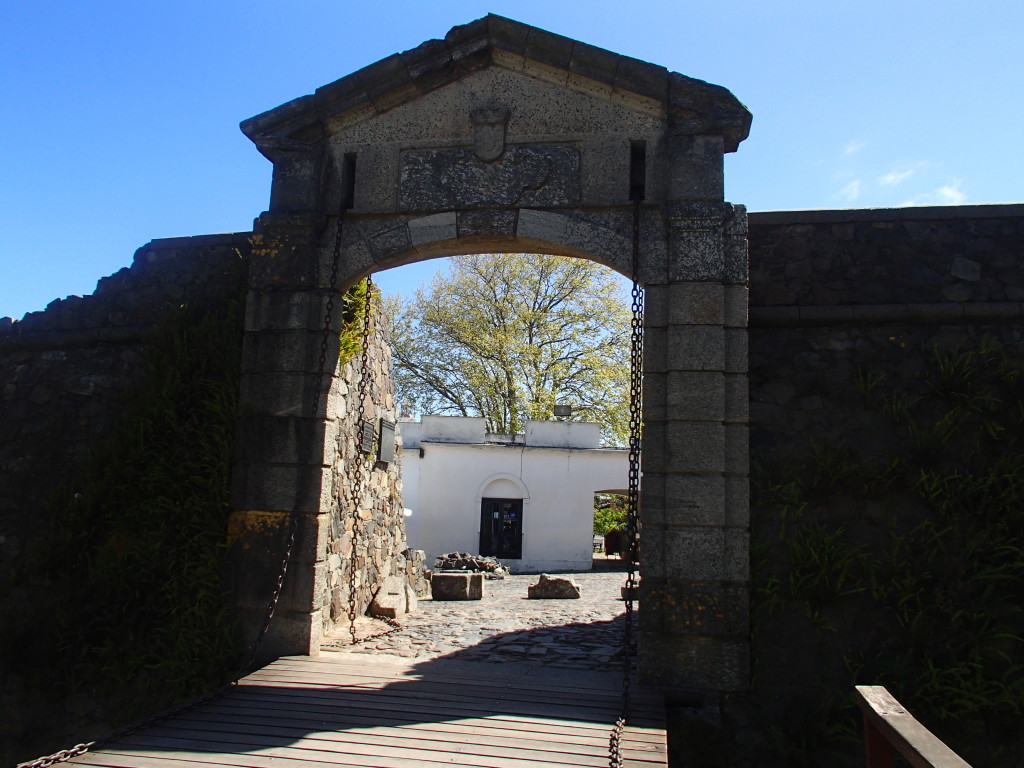 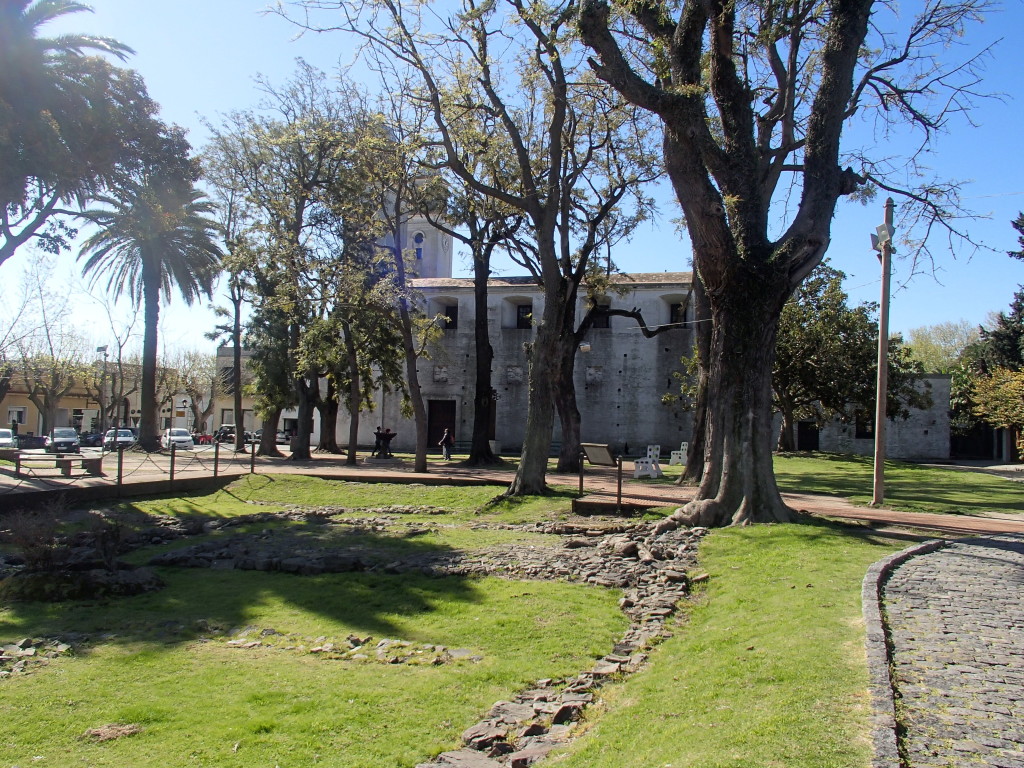 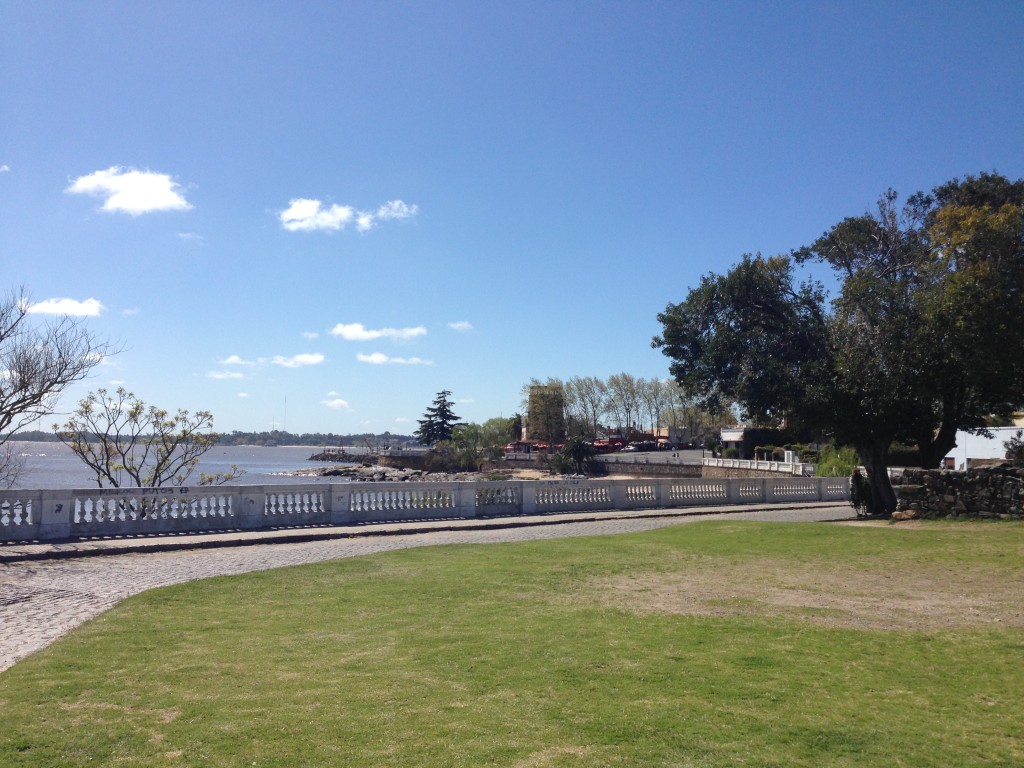 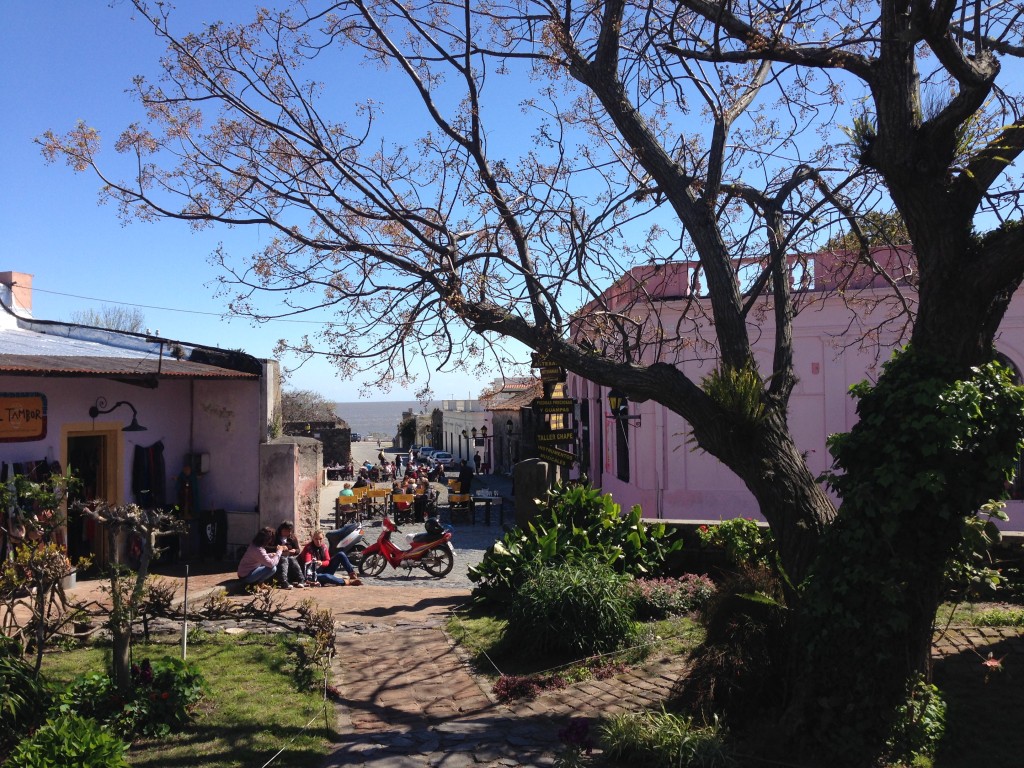 Rambla Constanera runs along the bank of the Rio de la Plata with a paved walkway, benches, and a picnic/barbeque area. There are only two restaurants – the area is primarily residential. Not surprisingly, it is a popular spot for all – families, couples holding hands, joggers, and teens hanging out with friends… Many walked along the river with their dogs prancing alongside off leash. Some dogs appeared to be out for a stroll on their own. One day, Lori watched a black Labrador with a green collar romp on the beach and then walk up to the sidewalk and say hi to passers-by. About 20 minutes later, she saw the dog trotting down the sidewalk toward her; stop – look – cross the main street, and then continue up a small residential street, hopefully toward home… 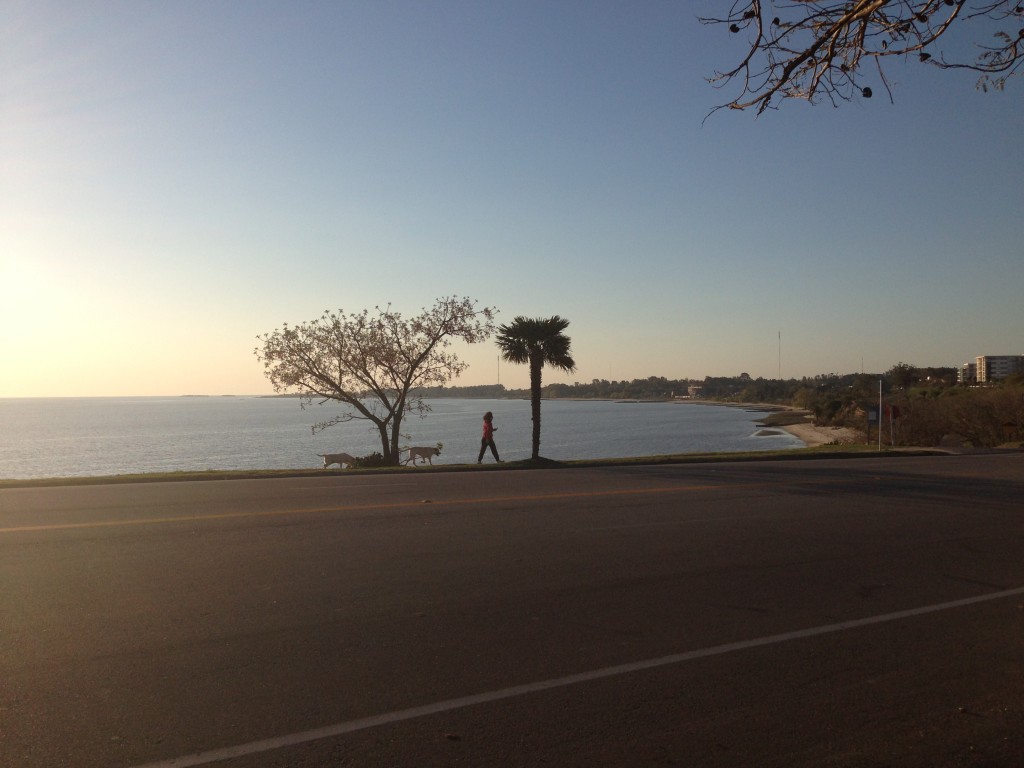 Out and About in Town

The side streets that lead up from the river are mostly residential, but there are a few interesting sights mixed in. In the early 1900s, an entrepreneur from Argentina financed a hotel-casino, bullfighting stadium, jai alai court, and horse race track. Two years after the Moorish style Plaza de Toros opened, the government of Uruguay outlawed bull fighting and the structure was never used again. Eventually, the other buildings were abandoned and only the racetrack operates today. 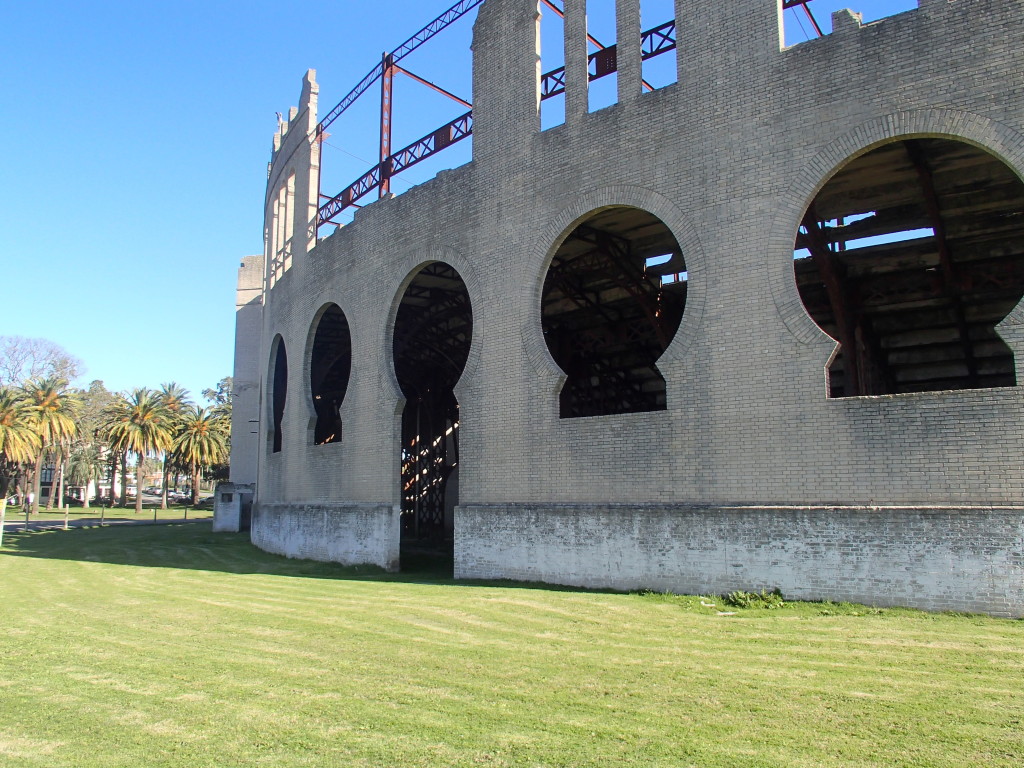 If you like looking at old cars, you will have lots of fun. We saw many makes and models ranging from VW bug to Citroen in front of homes and in town. One restaurant made creative use of several vintage cars – one was a planter and one was a private booth where you could sit and have a meal. 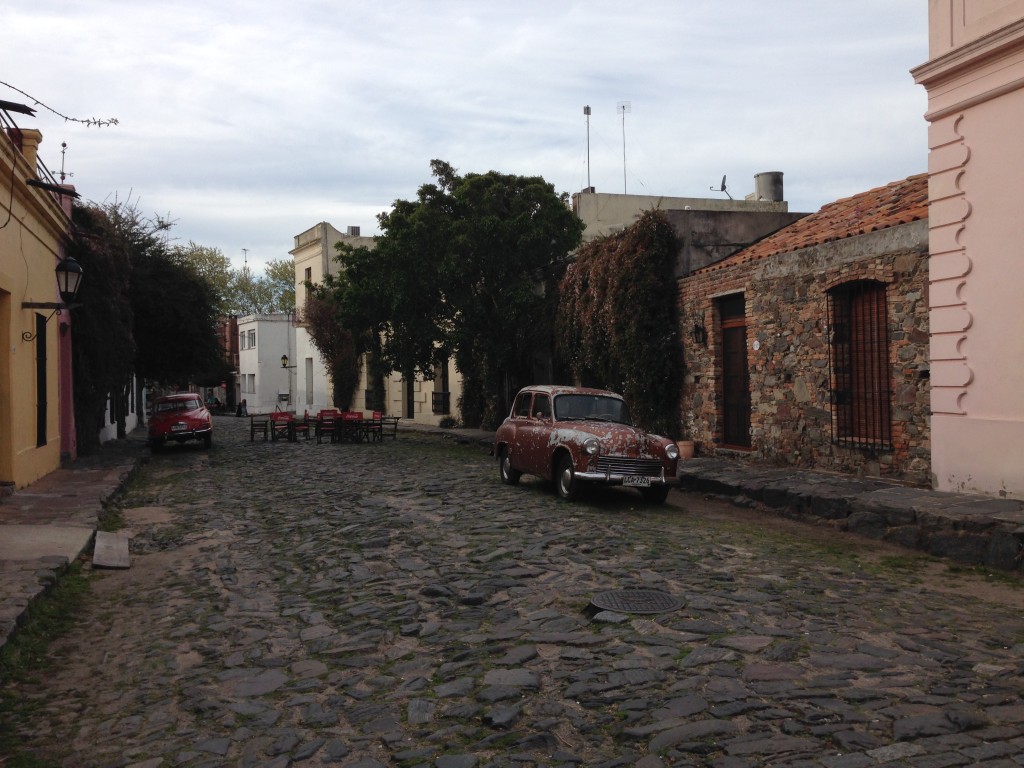 One day, we rented a car and drove on Route 1 about 20 kilometers outside of town to explore. As we drove along the palm-tree lined road, we passed a small airport, deserted looking Days In, and police station before turning off at a sign for Playa El Calabres. The large beach was nearly deserted, but we did see a man on a horse drawn cart filled with logs pass by on a path. Next, it was back to the main road for a bit before turning off toward the next beach, Playa Matamoros. We went down residential street lined with small houses onto a tiny bridge over a stream, and then down a narrow tree lined road past a primary school. Then the road opened up to a wide green hillside with farms (one with sheep) and several large homes. The beach was also deserted except for the remains of a small building. 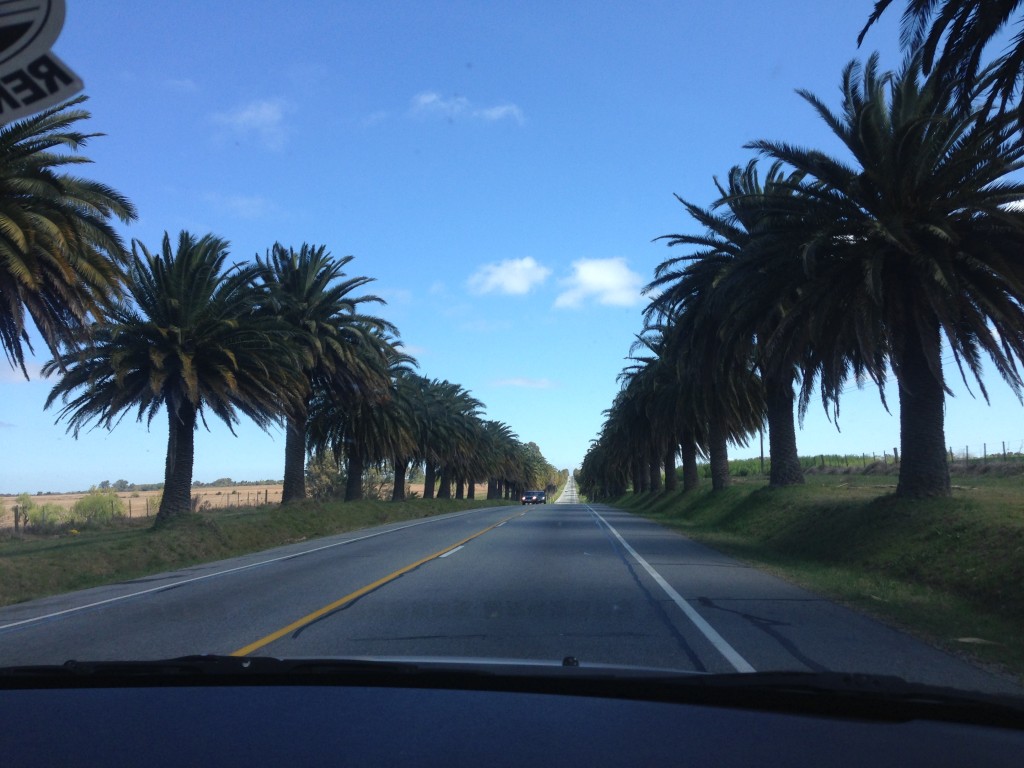 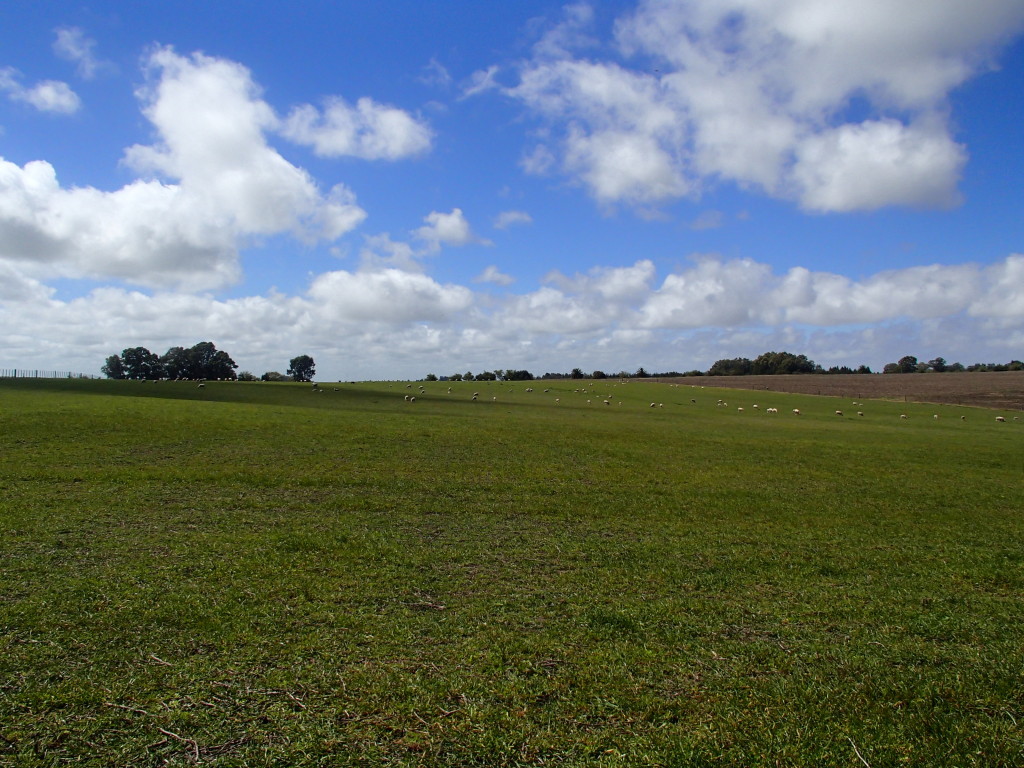 We saw a lot of loose dogs throughout Colonia del Sacramento. Some owners don’t put collars and leashes on their dogs, so it was hard to tell exactly which were stays. The street dogs congregated in the town squares, relaxing on the grass. They hung out at the park near the fountain. They plopped down in the middle of the sidewalk outside of shops. One barked at and chased cars in the main tourist plaza. They wandered through the neighborhoods past dogs tied up in their yards. We saw an especially friendly trio at a restaurant in town – they were quite talented beggars. As we ate outside, one cutie sat and stared at Lori while Michael gave her the ‘don’t even think about it’ look. Diners at two nearby tables gave them food and pats on the head. When we left Colonia on a chilly, rainy morning, we saw several dogs at the ferry terminal huddled on the pavement against the building entrance to get shelter from the rain. 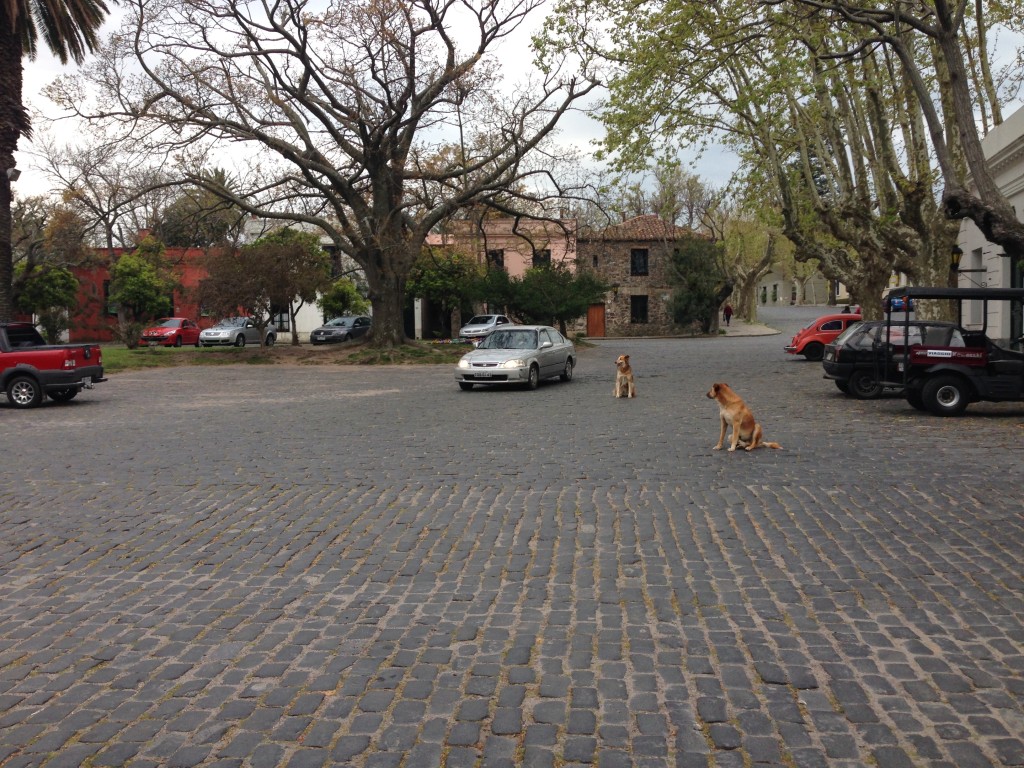 Stray dogs in the historic quarter

Contrary to the street dogs in Thailand, many of the strays in Colonia del Sacramento seemed fairly well fed and healthy. But it still made Lori very sad to see so many beauties without proper shelter, food, water, medical care, and love. She searched online to see if there were any local rescue groups like the one we found in Koh Phangan, but no luck. But she did find an article in the local paper about 70 dogs and an undetermined number of cats found dead in a nearby town. Read article > (Tip: if you view the page in Google Chrome, the browser will auto translate it to English.)

There are several shops in the town center that sell souvenirs, jewelry, and clothes. We liked Peldanos and La Carlota for handcrafts, and Manos del Uruguay and Reina Urbana for clothing and handbags. Just outside the historic quarter on the bank of the river there is an outdoor craft market (Feria). If you like malls, stop by Colonia Shopping, five minutes from the port – it is small but has a great grocery store and money exchange.

The food and drinks in Colonia del Sacramento were similar to Argentina: grilled meats, empanadas, alfajores, and lots of mate. We had several meals in town – none were super exciting – but all were tasty (Lori even had some good salads). We ate at Punta Piedra and Mercosur on Avenida General Flores.

Our hotel had a kitchenette with fridge, microwave, hot water pot, and dishes, so we stocked up on some basic items. Michael has gotten very good at creative hotel room cooking. One of our common go-to items is PB&J. We couldn’t find peanut butter in Argentina but managed to find a jar in Colonia. We didn’t think much about the price until later when Lori was poking around in the hotel room. She saw the sticker on the jar and pulled out the calculator – 259 Uruguay pesos converted to $12 U.S. – wowee – that’s some pricey imported peanut butter (the label said made in the U.S.)!

When to visit: If you go for just a day trip, avoid the weekend if possible because the town was crowded with groups of tourists on walking and biking tours. Colonia was much more enjoyable during the week.

Getting there: You can get to Colonia del Sacramento from Buenos Aires by ferry or from Uruguay by ferry, bus, or car. We took Buquebus from Buenos Aires and it was really easy. There are different classes of service. We picked business class: it had a smaller, private area on the ferry with bigger seats, tables and chairs, and complimentary champagne. In Buenos Aires there was a VIP lounge with complimentary coffee / tea; we didn’t see a lounge in Colonia. If you go for a day trip from Buenos Aires, don’t forget to bring your passport! 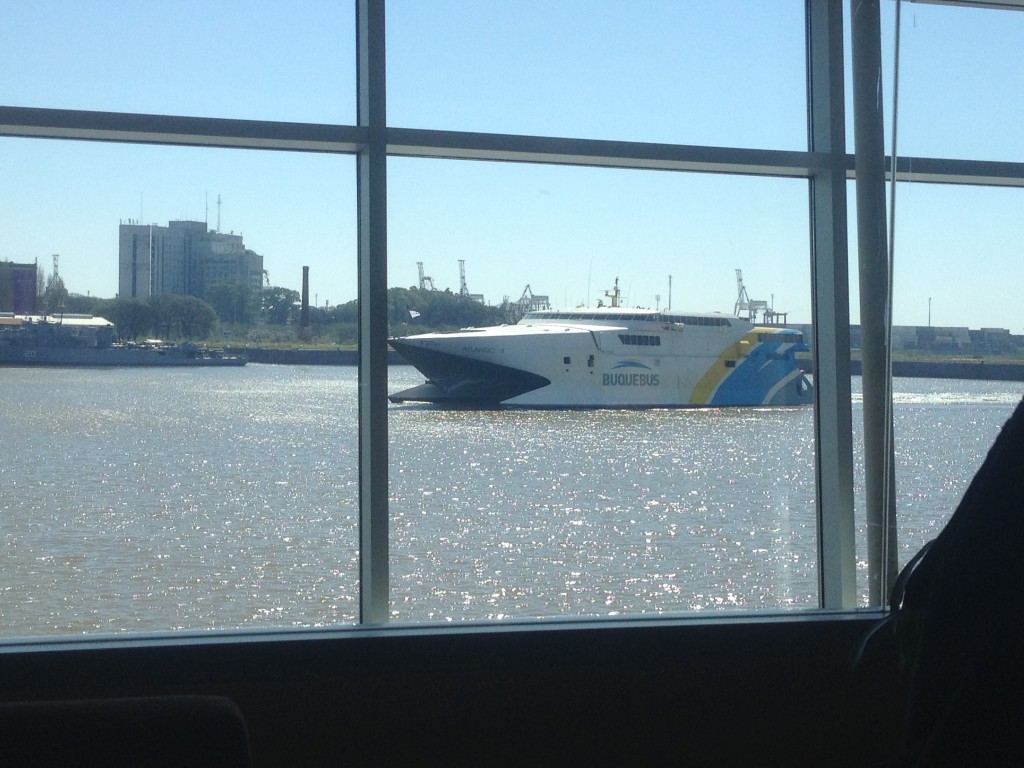 Money: We had trouble getting money from the ATM in Colonia (others on travel forums noted the same) and the money exchange at the Buenos Aires ferry terminal was closed (it is closed on Sundays), so bring extra cash. The good news is that many stores and restaurants take multiple currencies: dollar, euro, and Argentina peso.

Communication: If you don’t speak Spanish, bring a dictionary, as many shop and restaurant employees don’t speak English.

Travel to/from Argentina: If you are subject to the Argentina Reciprocity Fee, save your fee receipt for the return to Argentina. 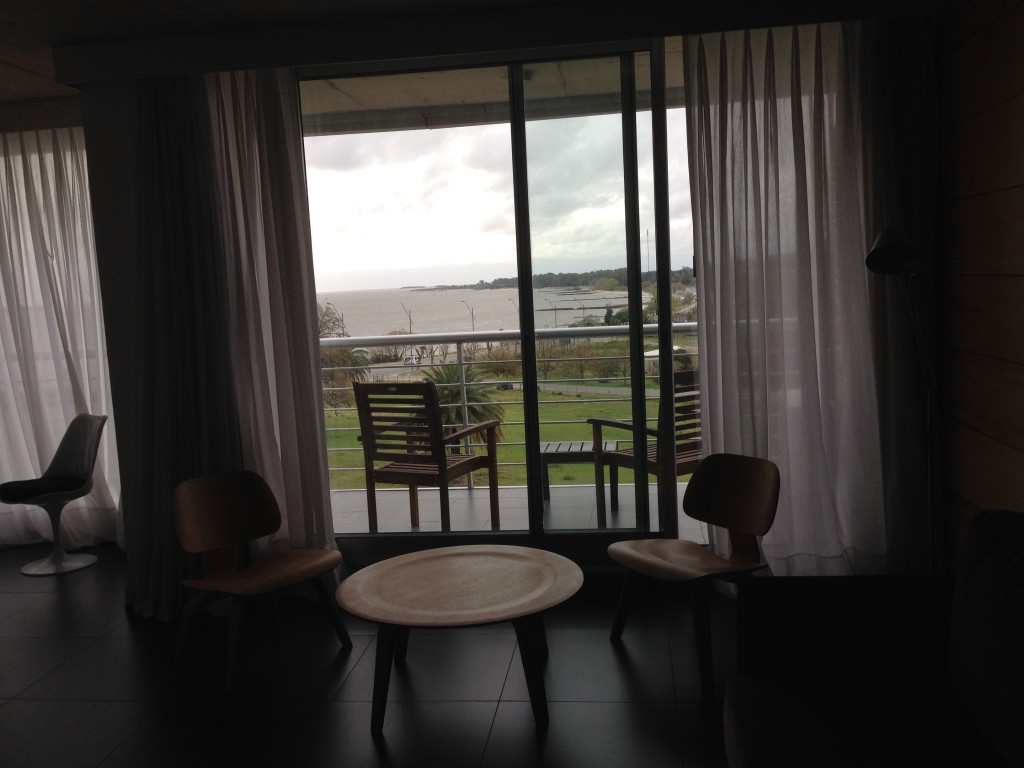 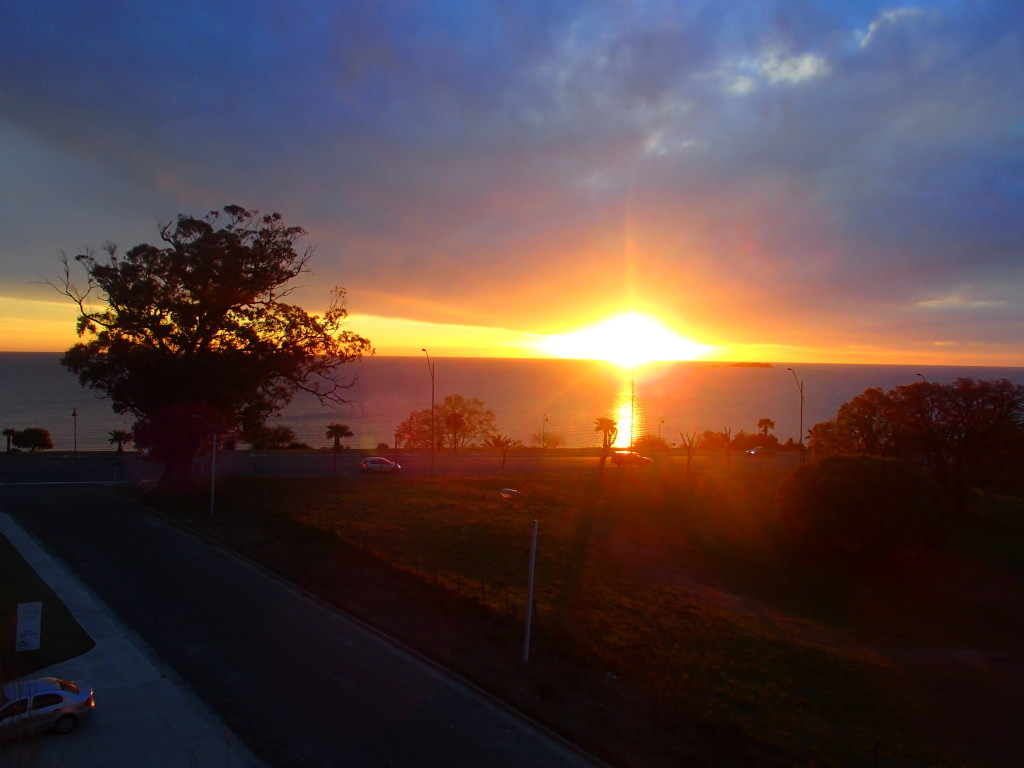