Koh Phangan is not easy to get to, but when we did, we met partiers, expats, ferry scammers, and friendly beach dogs; along with lots of urgent care centers and bandaged tourists.

Getting to Koh Phangan

We expected the journey to be long, sweaty, and physical – and it was. The first part was easy, a 1.5 hour flight from Chiang Mai to the island of Koh Samui on Bangkok Airways – and then the fun began. There is no airport in Koh Phangan; the only way to get there is by ferry. We landed at 1:45 and planned to take the next Lomprah ferry to Thongsala Pier at 5:00 with a 40 minute drive to the Koh Samui pier, but found a speedboat option leaving at 3:00 for 850 bhat per person.

We crammed, literally, into a minivan for a kamakazi ride to the boat dock – luckily it was only 15 minutes away. The driver nearly took out two mopeds – a Thai women driving in front of us on the road and a male tourist stopped at the turnoff to the dirt path to the dock. We hung out in the waiting area for about 20 minutes, a small tent with plastic chairs on the dock, while a few vans dropped off more travelers. A few people were drinking beer and then we spotted a small cooler, so we grabbed a drink. A guy in a pickup truck collected the vouchers. The boat arrived and everyone walked down a narrow, uneven, rickety gangway with steps and crammed onto the boat. The steps to board the boat were narrow and it was necessary to step up and turn sideways – a bit of a challenge with a backpack on. Before departure, Michael turned on the jambox for some music and we chatted with a passenger, Nash from LA, who was sitting on the floor in front of us (not enough seats for everyone).

The boat ride was 20 minutes and we hit a few good bumps along the way. We arrived at what we thought was Thongsala and everyone got off. As we collected our luggage, we heard a few people telling the captain that we were supposed to go to Thongsala. Apparently, we were at Haad Rin Pier. Another traveler said the captain advised that we had to get a tuk tuk to Thongsala for an extra fee. Here’s the scam… There are two piers on Koh Phangan, which we knew. When you buy the ticket at the airport, you specify the pier – it costs more to go to Thonsala, which we and several other travelers purchased. The boat captain dropped us at the wrong pier so we would have to pay his buddies for a tuk tuk ride. Luckily, the power of the crowd prevailed – led by Nash, the outspoken gal from LA (thanks Nash). Twelve of us gathered around the captain and told him we paid for transportation to Thongsala so he could take us there or refund the difference. At first he played dumb, but then he made a call and told us he would take us there. After a five minute boat ride, the captain pulled up close to the shore instead of the pier and made us all jump off (and throw down our luggage) into the shallow water. What a bleep bleep! I knew it was the correct pier because there was a long walkway with a blue canopy and the hotel had advised us to walk to the end to look for our driver. 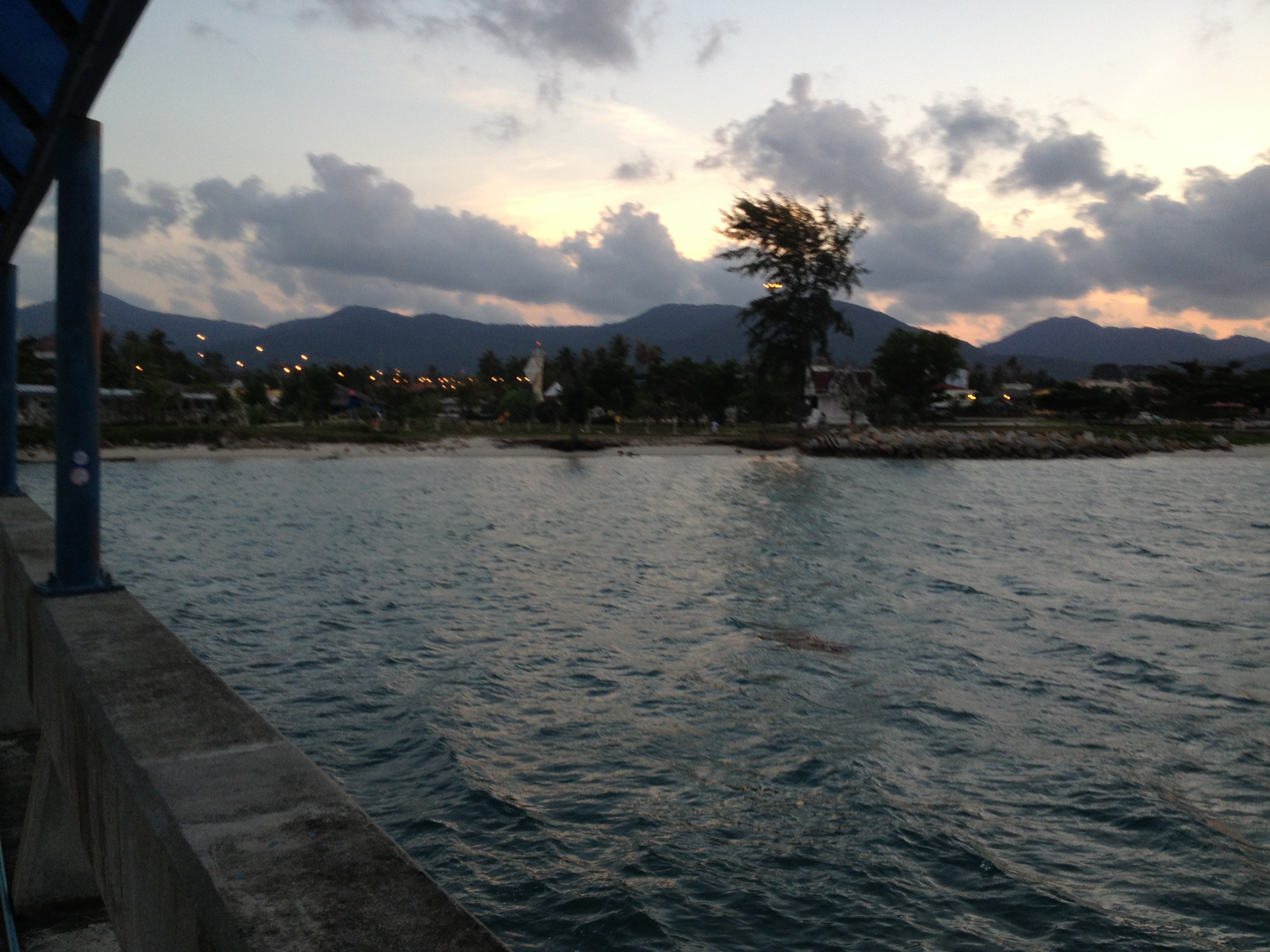 Beach were we were dropped off

After a few minutes, we found our tuk tuk driver and had a five minute ride to the flat. After check in, I walked a few feet to the beach and a beautiful, sweet pitbull boy ran up to me to say hi. I went to the flat and grabbed the dog treats I purchased in Chiang Mai and gave him one. I later found out that a local family owns and mistreats him. Since I didn’t know his name, I called him Sandy. It was the start of learning a lot about the dogs on Koh Phangan. 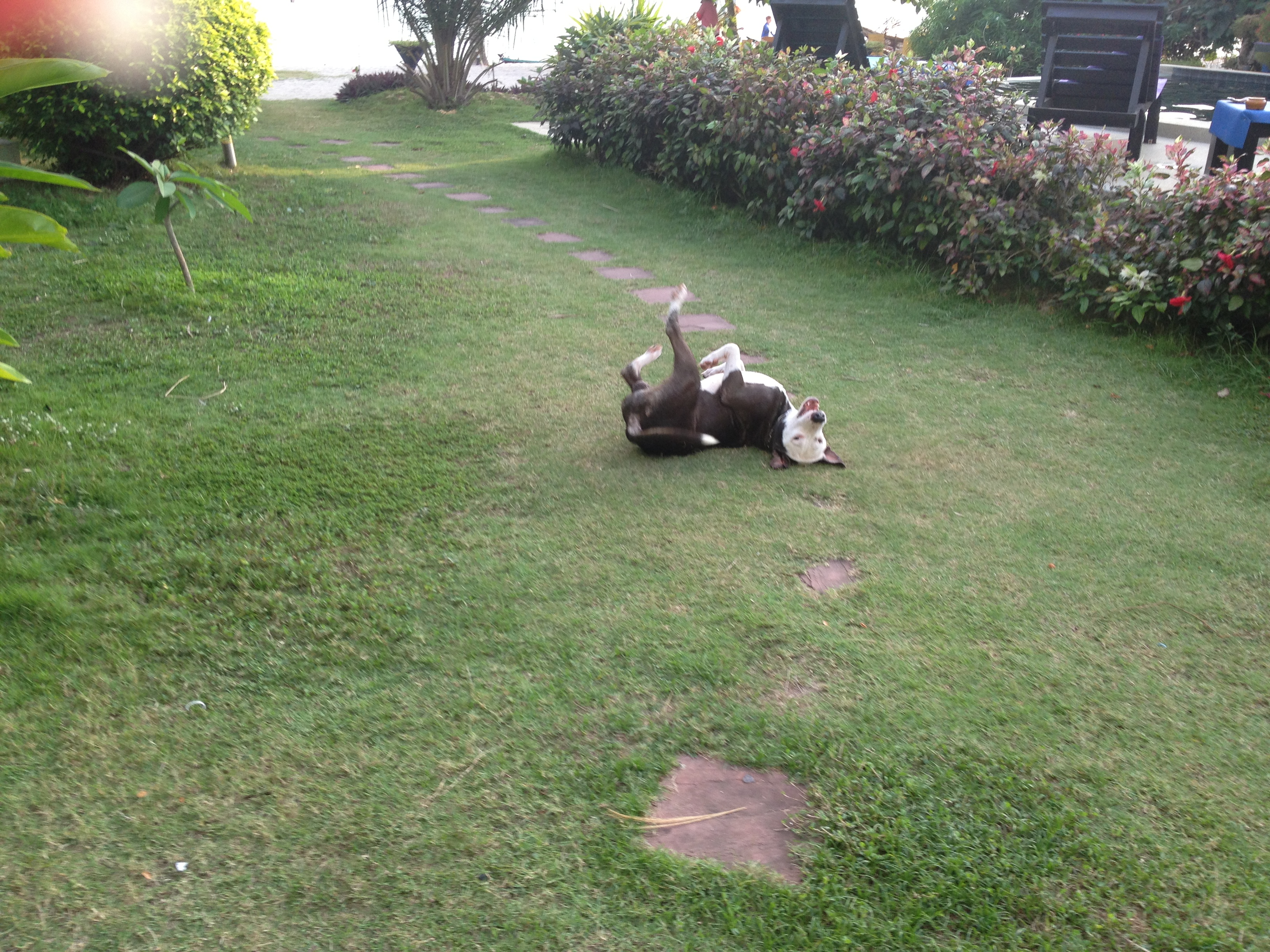 The reason we went to Koh Phangan was because the February Full Moon Party fell on Michael’s birthday. We figured it would be wild and crazy and we would be some of the oldest people there – and it was so. The taxi picked us up at 10:00 PM and dropped off a ten minute walk from the beach (they could not drive any closer). The walk through the narrow streets was entertaining. First, we grabbed a drink from the first cart we saw. At Full Moon, most vendors sell buckets – a small plastic bucket with a 500 ml of booze and a mixer. I picked vodka and orange soda; Michael got rum and Redbull. The vendor asked if we wanted her to make the drink (with ice) and we said yes. What we didn’t realize is that she would mix both of our drinks together in one bucket. That was one giant, strong drink – luckily all of the flavors blended together ok! 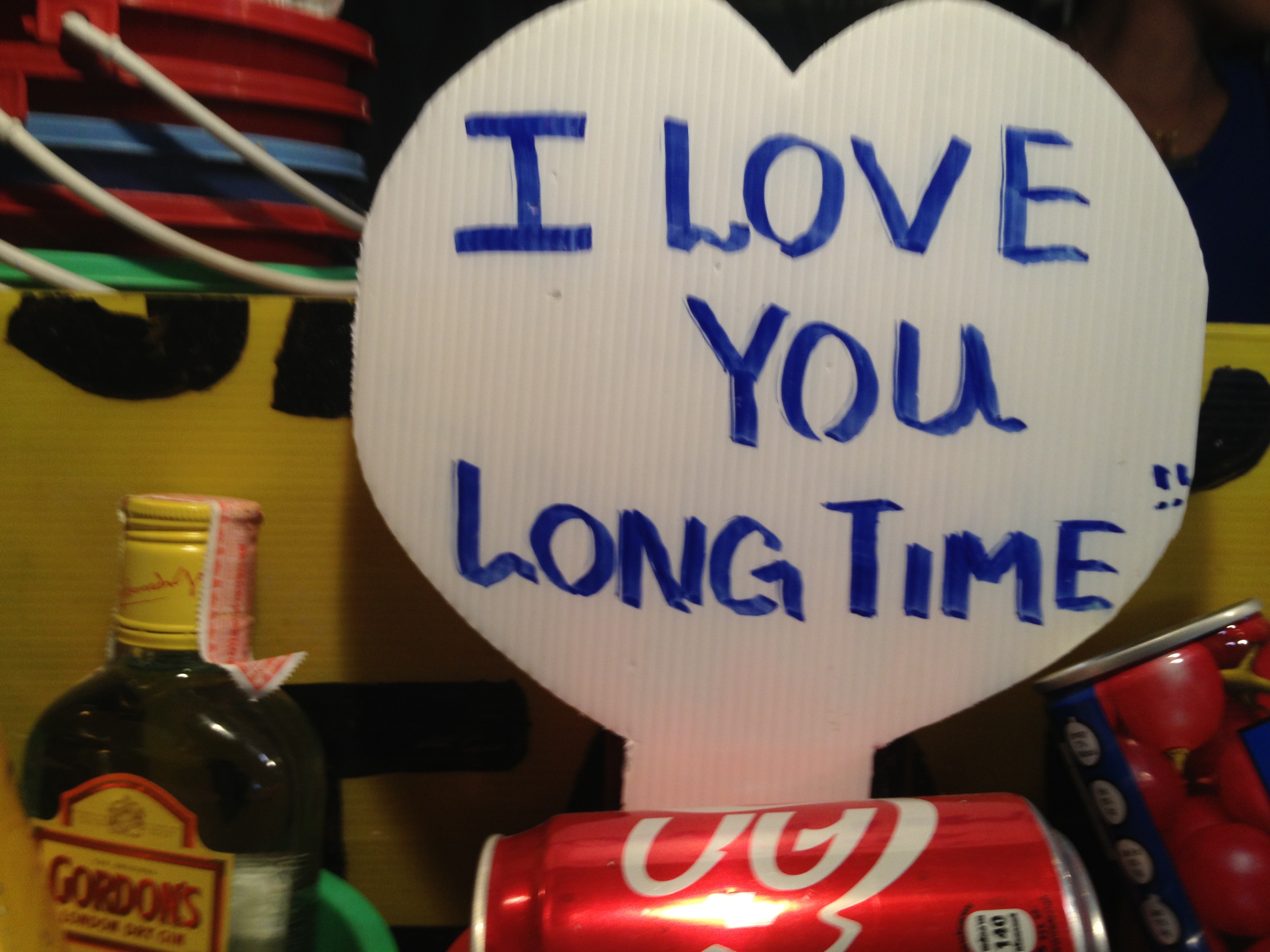 Bucket of Love – mess you up long time

As we made our way to the beach, we passed clubs with pulsing dance music and partiers singing and dancing in the street. Many people had used colorful glow paint to create interesting designs and messages on various body parts. There are several venues along the beach with music, lights, dancing, and of course – buckets. After some trial and error, we found a pathway that wasn’t too crowded and finally reached the beach. We hung out for a while and then made our way back to grab a taxi home around midnight. Michael indulged because, after all, it was his birthday, but I took it easy so I could get us home safely. We later learned that the moon wasn’t officially full that night until around 2:00 AM, so we only went to the ‘pre-party’ – oops. Did we feel that this type of party atmosphere would have been more our thing 20 years ago – yep. Are we glad we went to check it out – of course!

Ang Thong is an archipelago of 42 islands with limestone cliffs and caves in the Gulf of Thailand. We went on a day trip with Orion Cruises which included a stop for snorkeling off the boat and then a stop at two beaches. The snorkeling was ok – we saw a few different types of small fish (black and white stripe, black dots and yellow stripe on back). On the first beach, Na Tap, there were stairs leading up the cliff to a viewing platform, but we hung out on the beach instead. The park is a one hour boat ride from Koh Phangan and scenery is beautiful. We spent part of the ride on the bow of the ship, and while it was a bit uncomfortable to sit on the hard surface, it the breeze and view were wonderful. 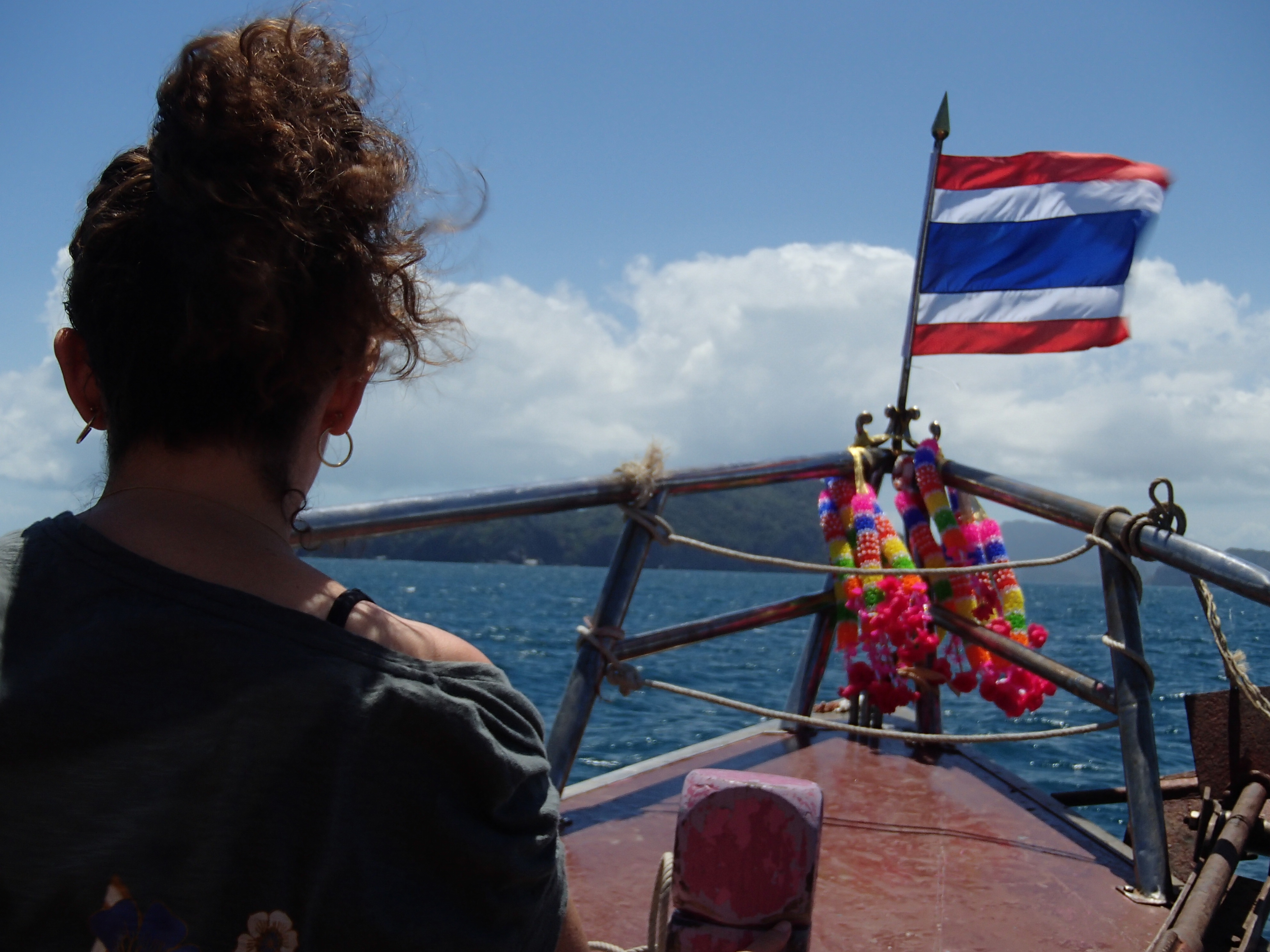 On bow of Orion boat

We stayed in a cozy flat on the beach, Awe Resort, and were happy to have a kitchen again. We went to the market several times (there is an air con Tesco Lotus in town) and Michael cooked up some yummy food. He was also thrilled to have a microwave so he could make popcorn. Aside from the Full Moon party, day trip to Ang Thong, and visit to Phangan Animal Care (details below), we pretty much hung out. The beach by the flat, Baan Tai, was ok, but not great – it was a bit small and rocky, but it was quiet. There was a kite surfing place next door and we often watched the surfers (Michael almost gave it a try). We also stopped by the hotel next door, Phangan Beach Resort, just about every day for drinks or snacks, and met some nice expats from Europe who work in the area. (Travel tip: try the banana pancakes for breakfast at Phangan Beach Resort – super yummy). Michael spent a lot of time chatting with Adam, the bartender. Lori’s favorite activity was watching the sunset while sitting at Phanagan Beach resort, sipping a cocktail and listening to chill music. 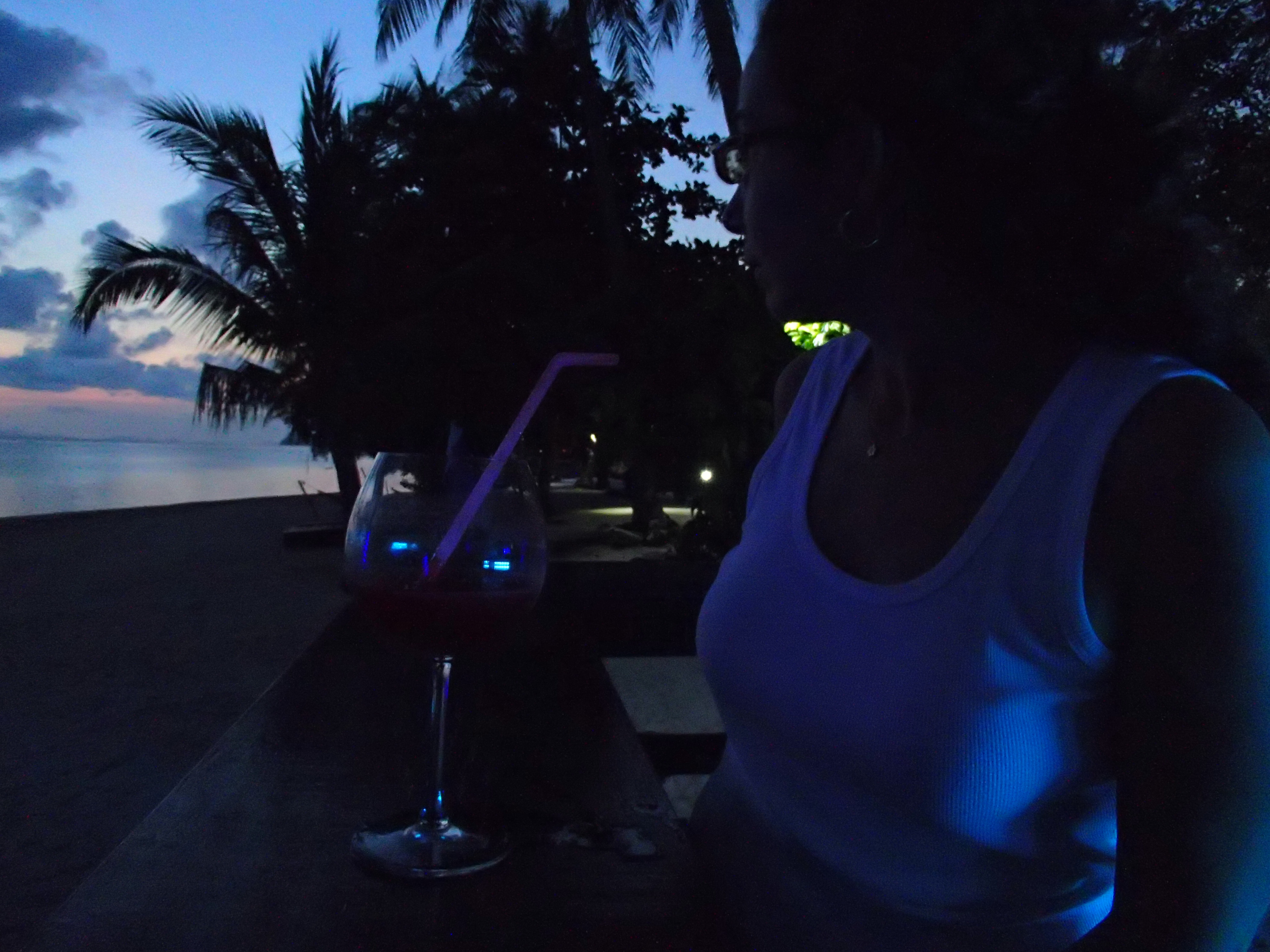 There are many stray and ‘owned’ dogs in Thailand, and in Koh Phangan we got to learn about them first hand. At Phangan Beach Resort, there are two staff-owned dogs, Rocky and Jade, who are well cared for. Rocky is a super slut who will roll over for a belly rub for anyone. Jade is shy until she gets to know you and then will come over to say hi. She likes curling up behind the bar. At a nearby hotel, Bailey lives with the managers, and pops over to Phangan Beach Resort with them for a drink. I mentioned Sandy, who is owned by a local family, but seems to live at the beach. The hotel staff said he had been injured a while back but the owner did not provide any medical treatment. We gave him treats and water and he stopped by our flat to say hi several times. I felt bad for him but then I saw that the guests in the flat next door fed him regularly and left out a bowl of water. Some of the strays are lucky because they are taken in or cared for by locals or tourists, but all are not so fortunate. In one of the tourist brochures, I saw an ad for Phangan Animal Care, an NGO that gives medical care to strays. I posted on their Facebook page and they invited us to stop by. Laura took a lot of time to show us around and tell us about their work and about strays on Koh Phangan (stay tuned for an upcoming post on Phangan Animal Care). 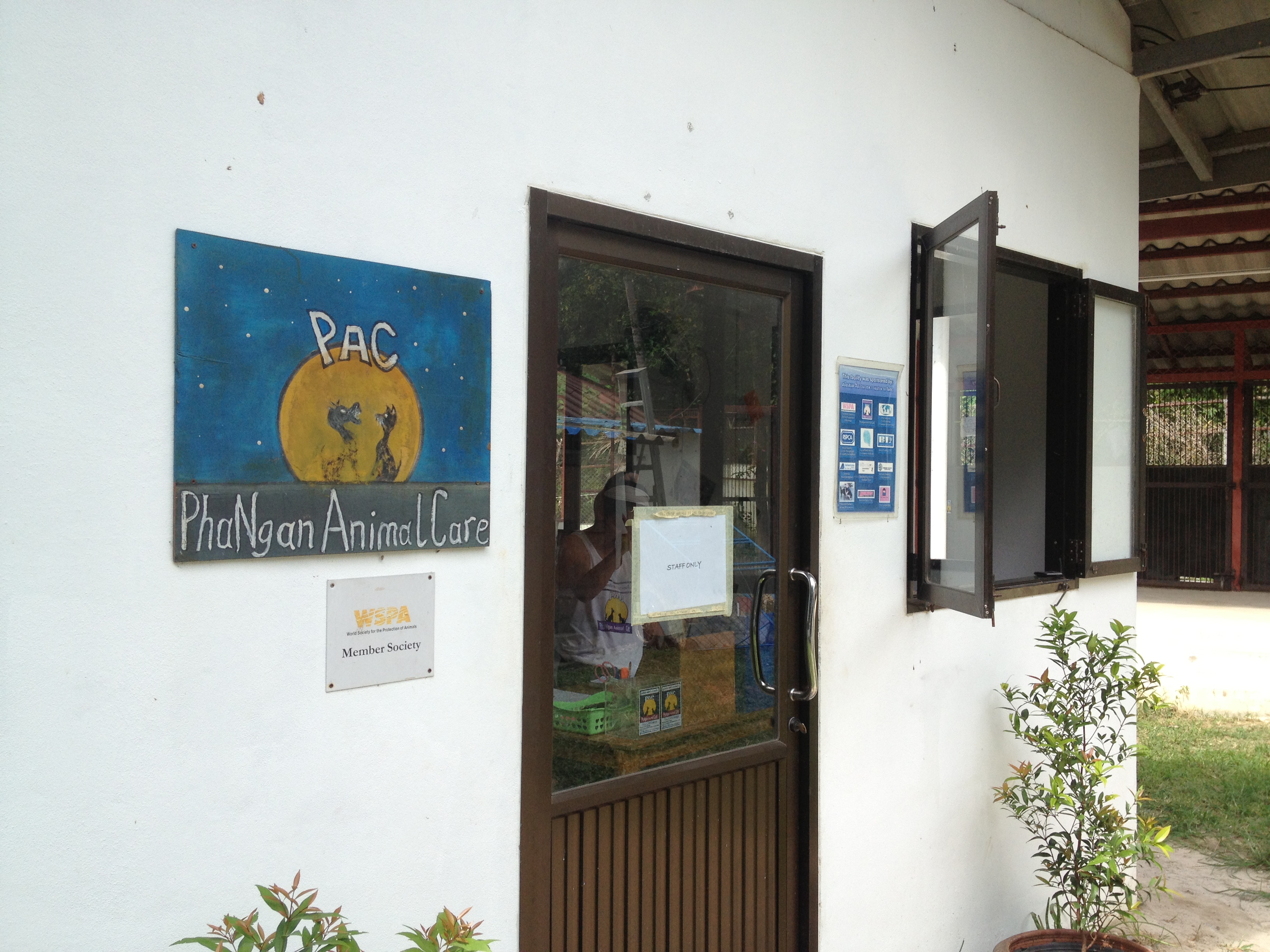 Our departure to Cambodia was a bit easier in some respects, but not without challenges. We had a big shock on the way to the pier and some typical travel delays. But we will leave you in suspense for now. Stay tuned for the next post about Cambodia…