Staying fit on a journey around the world

A trip around the world offered a fantastic opportunity to sample new food and drinks, but we knew that too much indulgence during an 8 1/2 month period would make us fat.  We both have a challenge maintaining our weight and have gained and lost 20+ pounds several times during our lifetime. We love to eat and we love the cocktails. We do like to exercise, but are not super into fitness. We run and do resistance training, and even ran a half marathon in 2001.

For the eight months leading up to world trip, we followed a weight loss plan. Lori lost 21 pounds and Michael lost 50 pounds! We got close to our goal weights and wanted to ensure that we did not gain weight on the trip. So we committed to making fitness a priority. We packed our running shoes, ipods, and workout clothes; and made the following plan.

Read on to see how we did…

We are doing pretty good. At the first two locations (Seoul and Bangkok), we worked out first thing every morning before breakfast. The gyms at these hotels were awesome. In the Golden Triangle it was fairly busy, so we didn’t exercise every day. Anantara had a cool gym and we were bummed that we didn’t get a chance to use it. Viang Yonok had a tiny gym that we used once in our three-night stay. In Chiang Mai, we worked out almost every day in the morning or afternoon. We typically don’t exercise on travel days. And, we have been doing a ton of walking! Some days are a challenge because we are not used the heat and humidity and feel a bit drained (allergies are also bad up here). The past few days we’ve been having a bit more booze than we should, so we need to work on that. But, overall I think we are off to a really good start. 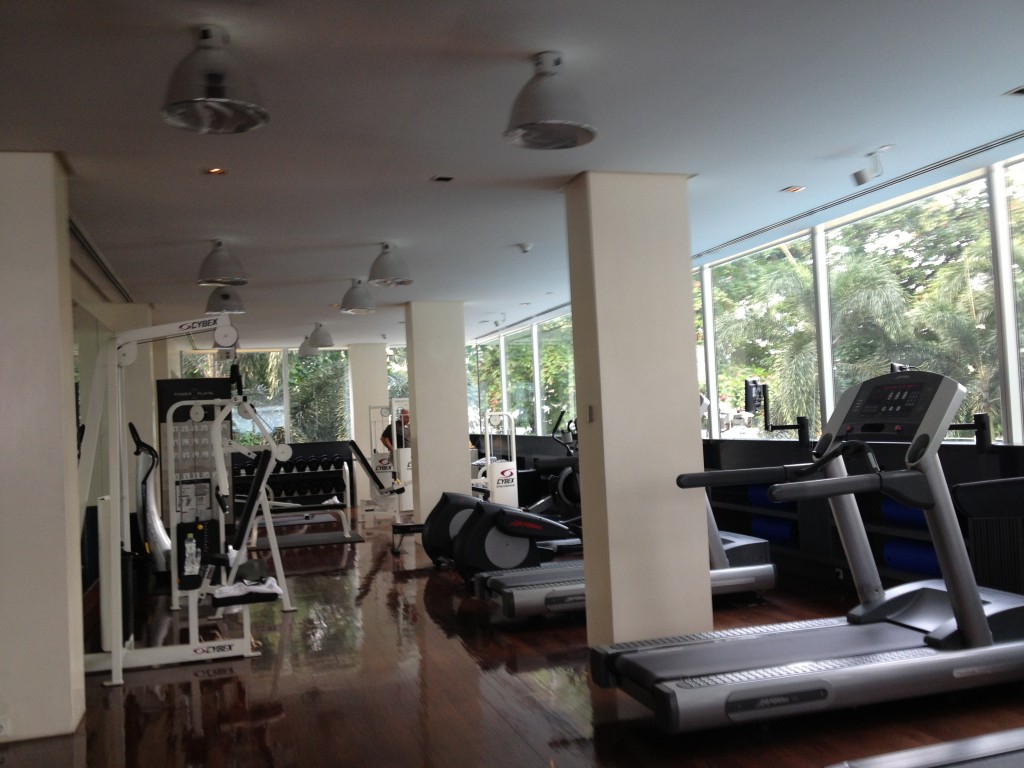 Lori is still doing pretty good, but Michael had a big setback when he got severe dysentery in Cambodia and spent the night in the hospital (Lori got a very mild case and didn’t feel well for a few days).

There was no gym at our flat in Koh Phangan and it was too hot to jog outside, so we had a bad exercise week. The hotel in Cambodia had a small gym with so so equipment. We worked out the first day, took two days off, and then Michael got sick. So, needless to say, there was no more exercise in Cambodia. The flat in Singapore had a tiny little gym with a great treadmill and elliptical. Michael was still recovering from dysentery, so he spent most of the week in bed. Since we didn’t do much sightseeing, Lori had plenty of time to do cardio every day.

There was no place to exercise at our first Africa destination (safari in Tanzania), but we did go on a three-hour bush hike one day. At the next destination, Zanzibar, there was no gym at the first hotel in Stonetown (two nights). But then we spent eight nights at a remote beach resort that had a small gym with ok equipment. Lori worked out almost every day and Michael continued to take it easy – he was in the final recovery from dysentery – but he did get in two scuba dives. 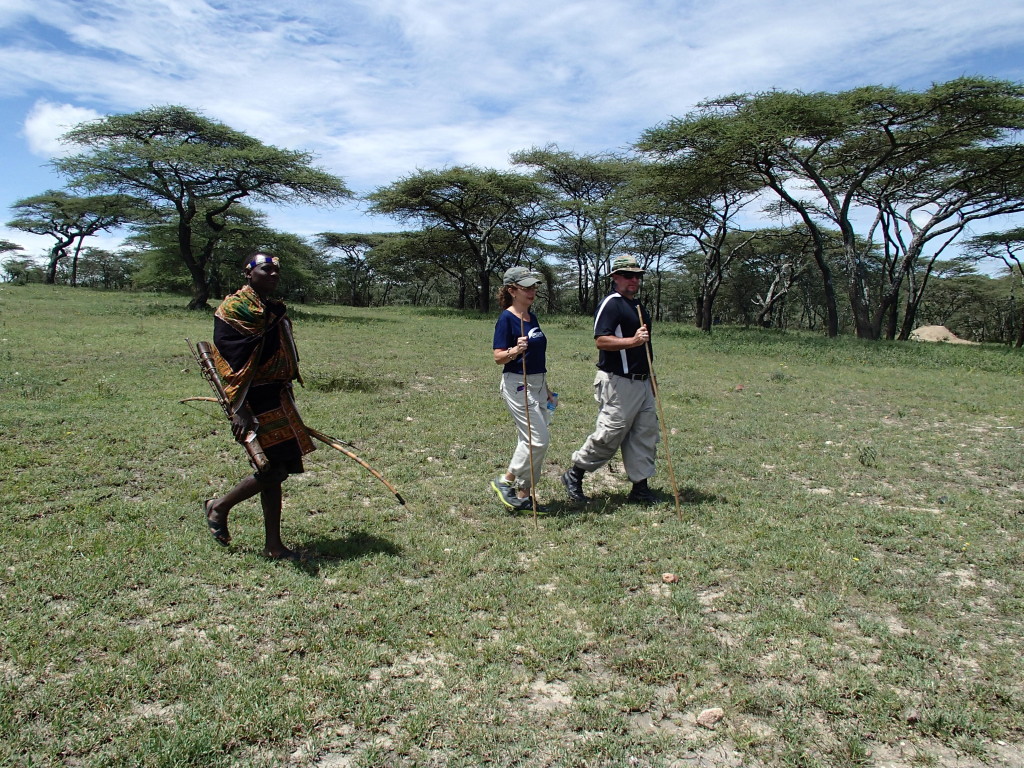 After Zanzibar, we spent ten days in Uganda with a packed itinerary. We did not have the time or facilities to work out, but did hike on the day of the gorilla trek (two-hour round trip up hill). The next stop was Stellenbosch, South Africa for one week. There was no gym in the flat, but Lori did a few brisk walks. In Cape Town, the flat had a small gym, which was enough for Lori to do cardio nearly every day. Michael developed what we think was severe allergies or a flu, which kept him from working out.

Next, we headed to the third leg of the trip – Europe… In Berlin, there was no gym at the hotel, but we did a ton of walking. Then we slowed the pace and booked a flat in Istanbul with a kick ass gym for four weeks. We needed some time to slow down and focus on exercise. The gym had all of the latest Life Cycle cardio and resistance equipment, along with free weights and lots of space to stretch. There were classes too, but we assumed they were in Turkish. We worked out every day and loved it! On the days we went out, we also walked a lot. Istanbul has a lot of hills, and our flat was 15 minutes from the metro station.

So, during weeks 8 – 12 Lori did some sporadic exercise and Michael got over his health challenges. We were feeling a bit down, but then we reached Istanbul. The first two weeks of exercise were awesome and we were motivated to keep up the pace. 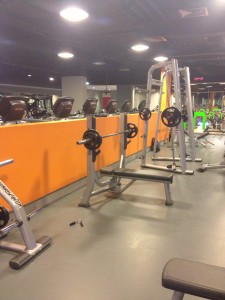 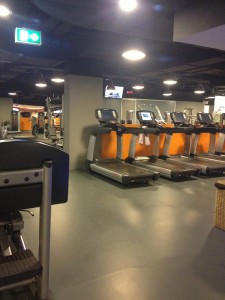 It was the Summer of Spain… We continued the regular workouts in Istanbul and then headed to Spain for the summer. The first stop was Madrid for one week – there was no gym at our flat, so we took a week off. Then we headed to Ibiza for ten days – no gym at the flat either. We contemplated trying to join the gym down the street but decided to give in to the island’s party vibe and just have fun. The next destination was a Barcelona flat for six weeks – also without a gym. Since we would be there for a while, we researched gyms in advance and found one just five blocks away – Club Metropolitan. When we got there, we learned that the minimum membership term was three months – crap. We joined anyway and also planned to use the Valencia club later in the summer. The gym had newer model Life Cycle cardio and resistance equipment, but the temperature was really hot. It was like working out in a stuffy, smelly sauna – yuck. But we did; we went to the gym five – six days a week. Michael felt like he got in some good workouts; Lori, not so much this time. 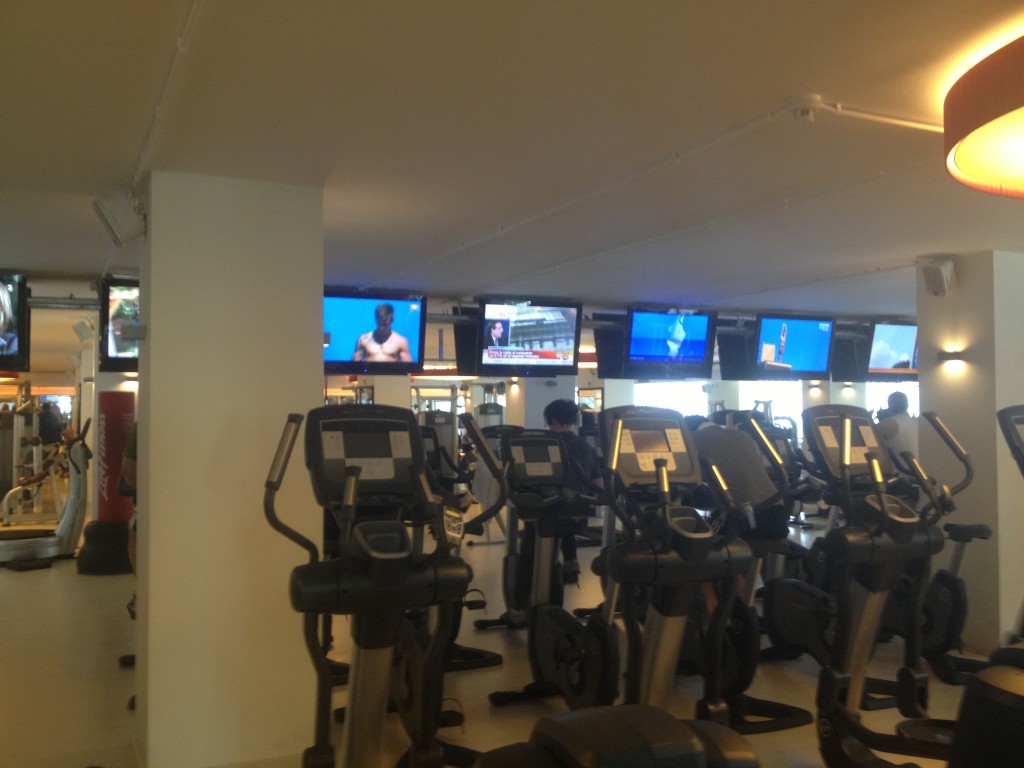 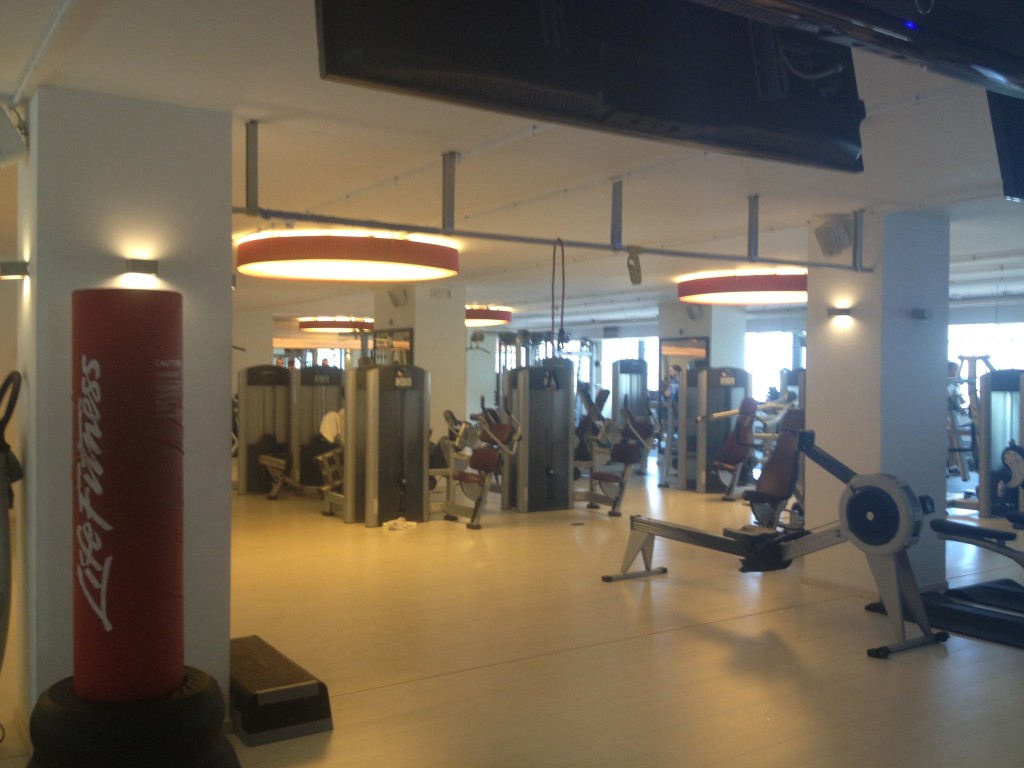 Although we exercised during the summer in Spain, we apparently consumed too much tapas and wine and put on a few pounds – it was inevitable. During the short stay in Lisbon, Lori did a few cardio workouts in the small, so so hotel gym. Then it was off to the final continent on our adventure – South America. The hotel in Rio de Janeiro had a small gym with great cardio equipment and a giant TV, so Lori ran just about every day. Michael worked out once and then got food poisoning again (this time it was just a mild case).

Next, we spent one month at a flat in Buenos Aires – this time we picked a building with a gym. The gym was small, but it had decent cardio and resistance machines. We got into a good routine and worked out five – six days a week. Then it was off to Uruguay for ten days where we continued the regular workouts at the hotel gym (the gym was small, but had good cardio equipment).

We spent the final two weeks in Cusco, Peru. The hotel did not have a gym, but if it did, we wouldn’t have been able to do much exercise due to the high altitude. It was so strange to get an elevated heart rate and feel winded just walking up a steep hill.

The adventure ends – how did we do

We didn’t weigh in when we got home, but knew that we put on a few pounds. In month seven in Argentina, we needed to buy jeans because it was cold and our pants were a bit too tight for comfort. For the most part, we made a good effort to include fitness opportunities in our plans. But when we worked out, we didn’t really push ourselves to improve – we mostly maintained the status quo. Overall, our efforts helped offset some of the yummy food and drinks we indulged in and minimized the weight gain.